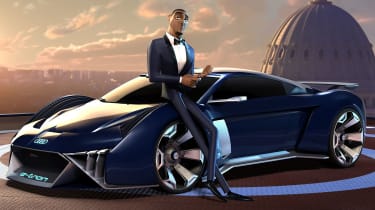 Audi has designed a new car but not only is it a concept, it won't even make it into physical form. This is the Audi RSQ e-tron: an electric, fully autonomous concept which is due to appear in the Twentieth Century Fox movie Spies in Disguise starring Will Smith and Tom Holland.

It’s a first for the Audi brand, in that the concept is designed exclusively for an animated film. It’ll be driven by the character Lance Sterling - a spy voiced by Will Smith - and features autonomous tech so he can focus on the task of top level espionage. Of course, being a spy car it’ll have the sort of special gadgets which every secret agent needs.

While the RSQ e-tron is purely a fantasy movie design, some similarities can be drawn to other Audi concept - and indeed production - cars. Several design features are familiar to the recently-revealed Audi PB18 e-tron concept: the huge front grille remains, but the RSQ features a much more steeply-raked nose. 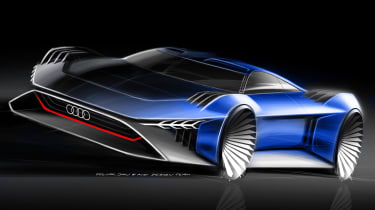 The grille is flanked by slim lighting elements stacked above aggressive strakes in the outer air intakes. The roofline is reminiscent of the current R8, while around the back there’s a full-width LED light bar and a vast rear diffuser.

It’s not the first time that audi has designed a car for a Will Smith movie: iRobot featured the RSQ: a vision into an Audi supercar of 2035, which bore a resemblance to the original R8 but which drove on spheres instead of conventional wheels.

Other concepts have been designed specifically for movies, too: Lexus designed the 2054 for Minority Report, Acura created a special NSX roadster for the Avengers movie, and of course there was the Aston Martin DB10.

What is your favourite movie car? Let us know in the comments below...