Bigger and more stylish than its predecessor, the latest Audi A4 gives the 3-Series some stiff competition. 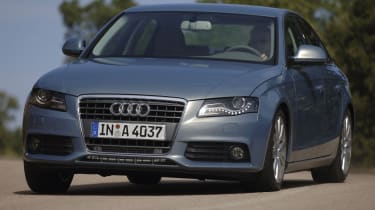 The A4 has evolved, and the latest model is an improvement on the car it replaces in every area. The understated looks have a sharper edge, while the interior build quality is hard to fault. It’s also roomier inside than its predecessor, and while the 2.0 TDI doesn’t come with the quattro four-wheel drive and hi-tech gizmos of more expensive models, it’s no less desirable. With a blend of image, quality, refinement and comfort, the Audi is a serious contender in the compact executive market.

We were impressed by the 1.8-litre turbocharged petrol version driven in Issue 982. But how does the model rate in 2.0 TDI diesel guise?

Audi expects this variant to be the biggest seller in the range. The longitudinally mounted direct-injection diesel produces 141bhp – up 3bhp on the old car – while torque is unchanged at 320Nm. And the unit is mated to a six-speed man­ual gearbox.

Crucially for company buyers, CO2 emissions are down from 159g/km to 144g/km, which means the A4 has dropped three tax brackets. Initially, the car will be available only in SE spec, although other trims will join the line-up throughout 2008.

On the road, the oil-burner delivers strong performance and decent in-gear punch. Both engine and road noise are quieter than in the old A4, and the Audi is better to drive, too, with excellent composure in corners and impressive levels of grip.

Steering is accurate and fluid, while the supple suspension does a fine job of absorbing bumps and imperfections. For owners who want a more focused driving experience, the A4 is also available with the optional Drive Select system. This allows you to optimise the power-steering assistance, sharpen throttle response and adjust the dampers to suit your tastes. Yet even without it, the six-speed gearbox offers a solid action, and while the A4 still lacks the driver involvement of the 3-Series, it’s more capable than its predecessor.

It’s also the biggest car in its segment. The A4’s longer wheelbase frees up more space for passengers in the back seats, while the larger 480-litre boot now tops the class.

As we’ve come to expect from Audi, the fit and finish of the interior is first-rate. It has a great blend of understated luxury, classy materials and robust build quality. The dash design is identical to that found in the A5 coupé, and the firm’s MMI central control interface – complete with a colour screen – is seen in the A4 for the first time. It’s standard across the range, and uses a combination of a rotary knob and separate switches to operate the audio and climate systems, in addition to the optional sat-nav and phone.

Deliveries of the A4 won’t begin until next March, but the new car is available to order at dealerships now. This 2.0 TDI SE is competitively priced and comes generously equipped, too. As ever, there is an extensive options list available, while a more powerful diesel version with around 170bhp will go on sale later next year.

Rival: BMW 320d SE The 3-Series is a fleet favourite, thanks to its classy image and strong 2.0-litre diesel. However, it’s neither as spacious nor as well equipped as the new Audi.