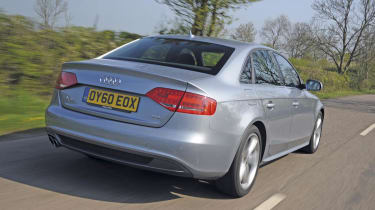 The A4 was the first Audi of the current generation, and its looks have been used as the template for every model since, from the A1 to the A8. As with its stablemates, it’s a classy and beautifully built machine, while its arrival confirmed the company’s position near the top of the compact executive tree.

It arguably sets the benchmark for image and desirability in this sector, especially in S line trim. Here, its lowered ride height, 18-inch wheels and LED running lights add an aggressive edge to the well proportioned shape. The fact its more expensive and exclusive A5 and A7 brothers share almost identical looks only adds to the premium appeal.

As we’ve come to expect from Audi, the interior reinforces the sense you’re driving something special. Faultless build quality and a clearly laid out dash are the main attributes, but the prestige feel of its switchgear, classy dials and top-drawer materials elevate the A4 cabin above its rivals.

The C-Class has upped its game inside, but the Audi still feels more luxurious and, with plenty of scope to adjust the wheel and seat, it matches the BMW for providing a comfortable driving position. On top of that, with the longest wheelbase on test, rear space is noticeably more generous than in the Mercedes, and split-fold rear seats come as standard. Factor in a 480-litre boot – the biggest here – and the Audi is the most practical choice. On the road, the VW Group 2.0-litre TDI is a familiar unit. It’s available in 138bhp and 168bhp versions, but even in high output guise, it provides the lowest torque output on test – 50Nm behind the Mercedes’ 400Nm.

Thankfully, the A4’s light weight ensures performance is up to scratch. From 0-60mph, it trailed the more powerful BMW 3-Series by half a second, but it was faster than the 320d to accelerate from 50-70mph in fifth and sixth gears.

The Audi is the only front-wheel-drive car in this line-up, but it doesn’t disappoint from behind the wheel. In fact, it displayed the best body control and impressive stability at speed. Driving purists will miss the uncorrupted steering and seamless traction of the rear-driven BMW, but while the A4 isn’t quite as agile as the 3-Series, its tidy handling ensures you won’t feel short-changed in terms of enjoyment.

Sporty S line models feature larger alloy wheels and lower, firmer suspension, which results in an unyielding ride. The bigger rims also transmit more noise into the cabin at speed, while lesser SE models put more emphasis on refinement. The A4 isn’t alone in this respect here, though, and the combination of punchy in-gear performance, interior quality and desirability makes it a stern rival for the revised Mercedes.

Chart position: 2WHY: Audi has replaced Mercedes as BMW’s biggest rival in the sales charts lately. And front-wheel-drive A4 aims to take victory away from rivals.