New Audi four-seat convertible gets two petrols and two diesels, with a 349bhp six-cylinder turbo reserved for the S5 model. 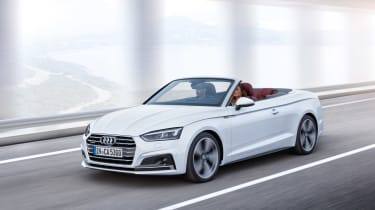 Audi has revealed UK launch prices and specifications for the new A5 Cabriolet, the final member of the new A5 family. Order book are open now, with first deliveries scheduled for April. Prices will start at £35,235.

The new A5 Cabriolet made its debut at last year’s LA Motor Show, joining the A5 Coupe and 5-door A5 Sportback. We’ve also driven it for the first time, on the eve of sales commencing.

The design of the elegant convertible follows predictable Audi themes with the strong shoulder line and steeply raked rear window angle lifted from the Coupe, along with Audi’s trademark grille and the latest signature LED headlamps. Short front and rear overhangs give it a sporty stance while maximising space in the four-seat interior. At 4,673mm long, the new Audi A5 Cabriolet is 47mm longer than the previous model.

The standard soft-top acoustic roof can fold automatically at the pull of one switch in 15 seconds. If the heavens open, it’ll take 18 seconds to close again but either operation can be performed at speeds of up to 31mph. Rollover hoops and side airbags, with automatically extending aluminium profiles, have been developed for the convertible to boost safety.

The A5 Cabriolet borrows the latest five-link independent suspension system from the A5 Coupe, with adaptive dampers available as an option to be incorporated into the Drive Select system. The same electromechanical power steering set-up is also carried over.

Changes are made over the coupe to compensate for the lack of rigidity that results from lopping off the fixed roof. Audi claims reinforced sills and additional bracing struts in the body help maintain a similar driving experience to the coupe. Despite this, the A5 Cabriolet is actually around 40kg lighter than the old car with the front-wheel-drive 2.0 TDi 190 tipping the scales at 1,690kg.

In terms of engines, Audi has four powerunits at launch for the A5 Cabriolet, with a high-performance engine reserved for the S5 variant. The cheapest model uses a 187bhp 2.0-litre TFSI petrol mated to a six-speed manual gearbox from £35,235.

A seven-speed S tronic gearbox can be had for an extra £1,490. With this engine, 0-62mph takes 7.9 seconds regardless of transmission, and top speed comes in at 147mph. The S tronic is cleaner and more efficient though, clocking a claimed 50.4mpg and 127g/km CO2 compared to the 47.9mpg and 136g/km of the manual. 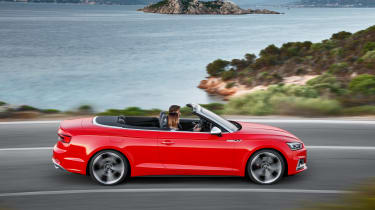 The entry-level diesel is a 2.0-litre TDI unit priced from £39,075, boasting 187bhp and a seven-speed S tronic automatic gearbox as standard and available with front-wheel-drive or all-wheel-drive. Front-wheel-drive versions are more efficient, delivering 62.8mpg and 118g/km compared to the quattro car’s 60.1mpg and 122g/km CO2 emissions. 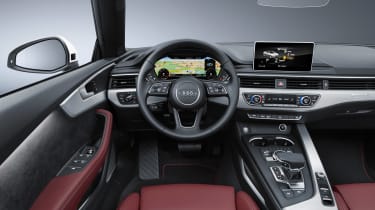 The A5 Cabriolet is a bigger car in this generation and the extra length can be felt in the cabin where shoulder room in the front is up by 26mm and rear knee room is extended by 18mm. The boot has a decent capacity of 380 litres with the hood down, while the rear seat can split 50:50 and fold to increase capacity further. An automatic tailgate is now fitted as standard, too.

The design treatment inside will be familiar to A4 and A5 Coupe owners, as will Audi’s impressive standards of fit and finish. The Audi MMI infotainment system comes as standard with an 7inch monitor that can be upgraded to an 8.3inch unit. Audi’s TFT virtual cockpit display can replace the analogue instruments with the 12.3inch screen too. 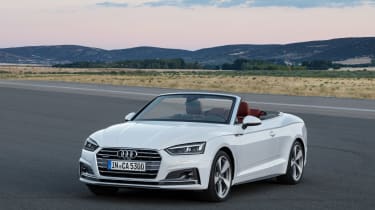 What do you think of the new Audi A5 Cabriolet? Let us know in the comments section below...