The Audi Q7 has been updated for 2019 with styling and chassis revisions, while new mild-hybrid petrol and diesel units have been added

Audi has revised the Q7 SUV for 2019, by introducing a host of styling tweaks, a range of new mild-hybrid powertrains and a honed chassis set-up.

The design updates for the seven-seater include a reworked grille, fresh front and rear bumpers, new side sills and chrome trim for the tailgate, plus a pair of revised exhaust tips. The Audi Q7 also now comes with two-tone paint as standard, which highlights the front splitter, side skirts, wheelarches and rear diffuser in anthracite.

LED headlights are included as standard, with either Matrix LEDs or HD Matrix LEDs and Audi Laser Light offered as additional cost options. The latter system combines an automatically controlled high beam with a small laser module in each unit; Audi claims it doubles the range of the Q7’s full beam. 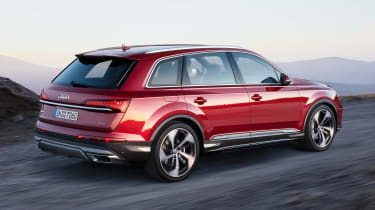 All Q7s in the UK will seat seven and feature air suspension as standard. Audi has also expanded the SUV’s options list to include a new active roll-stabilisation system. It brings a pair of active anti-roll bars, controlled by a 48-volt electric motor, that automatically adjust to reflect driving style and road conditions.

Three mild-hybrid 3.0-litre V6 powertrains are available for the new Q7, with buyers given the choice of two diesels and one petrol. The entry-level 45 TDI diesel produces 228bhp and 500Nm of torque – enough for a claimed 0-62mph time of 7.1 seconds and a top speed of 142mph.

All three engines are paired with an eight-speed automatic gearbox and Audi’s quattro all-wheel-drive system. Generally, the Q7 has a front-to-rear torque split of 40:60, as governed by a self-locking centre differential. However, when required, the Q7 can direct up to 60 per cent of the engine’s power to the axle with the most traction. 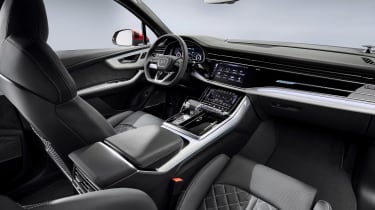 For enthusiastic drivers who are hunting for more muscle, Audi also offers a performance-focused SQ7 version, powered by a 429bhp 4.0-litre V8 turbodiesel with 900Nm of torque. It boasts a 0-62mph time of 4.8 seconds and a limited top speed of 155mph.

In a few months’ time, the Q7 range will also be bolstered by an eco-focused plug-in hybrid 55 TFSI e version. However, Audi has yet to confirm any of this model’s specs.

The updated Q7 SUV will go on sale in the UK from September. There’s no word yet on pricing, but we would expect only a modest increase over the cost of the outgoing model, with a starting point of around £55,000.

What do you think of the updated Audi Q7? Let us know your thoughts below... 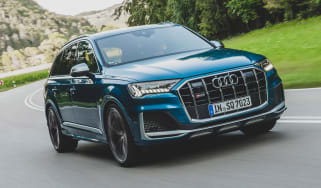