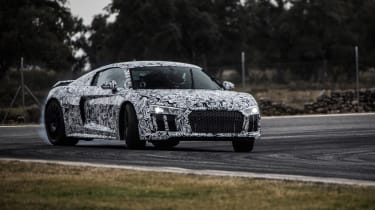 It’s impossible to cast a definitive verdict on such a driver-focused car from the passenger seat, but the good news is Audi hasn’t tampered with the R8’s winning formula too much. With the Ferrari 488 GTB and McLaren 650S both turning to smaller turbocharged engines, could this V10 model be one of last great naturally aspirated supercars? We wouldn’t bet against it.

Think back to the last time you saw an Audi R8 on the road. It still looks great, doesn’t it? It’s also still one of the best-handling and sweetest sounding supercars out there. But supercar customers are a demanding bunch and always on the lookout for something new, which is why an all-new R8 will debut at the 2015 Geneva Motor Show next month. Before the covers come off, we were invited to get intimate with a lightly camouflaged prototype at the Ascari racetrack in Marbella, Spain. Audi factory development driver Frank Stippler was drafted in to pilot us for a series of hot passenger laps, and the key engineers in the R8’s development were all on hand to divulge the details.

First, let’s cut to the headlines. A V8, possibly turbocharged, model will follow eventually but the new R8 will be offered only with a V10 engine from launch  - two power outputs will be available, either 533bhp or 602bhp in the V10 Plus model you see here – that’s 60bhp more than the outgoing V10 Plus. There’s no manual option, only a seven-speed S tronic gearbox and four-wheel drive is standard. If you want a rear-wheel drive R8 you won’t have to wait long – an all-electric R8 e-tron with two motors on the rear axle will also debut in Geneva, but it’s the combustion-engine we’re here to talk about today. 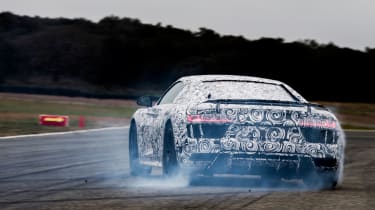 It’s the sound that hits you first – with no turbos muffling the airflow and ten cylinders thrashing away the exhaust note rips through the air on full throttle and detonates on the overrun. As we scream down the pit straight it’s even better from inside the cabin. Each full-bore upshift is accompanied by a snort from behind your head and a small kick in the back – something that’s been engineered in to add rawness to the experience. As we cling on tight around the undulating Ascari track a few things become apparent. Perhaps not surprising, given it’s capable of 0-62mph in 3.2 seconds, 0-124mph in 9.9 seconds and a 205mph top speed, it feels shockingly fast. At one point we clatter into a kerb and all four-tyres leave the ground – the moment they touch the tarmac again the forward momentum is instantaneous and snaps my head back against the seat. But that’s a vicious as things get, even at these breakneck speeds. 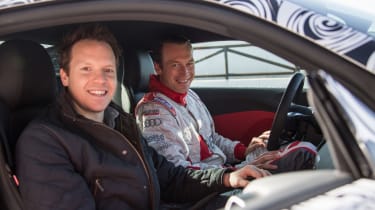 The R8’s genius has always been it ability to make sublime body control, big speeds and everyday usability seem effortless. We can’t comment on the latter yet, but the way the nose eases itself into corners, holds it line, all four tyres grip hard before there’s a smooth transition to a few degrees of oversteer on the exit, is extremely impressive indeed. Without taking the wheel ourselves the grip levels, adjustability and straight-line performance all appear to have all taken a step up, but the R8’s approachability is still very much intact. Of course, there’s some pretty extreme electronic trickery on hand to help out. The electromechanical steering is quicker than before and is available with a variable ratio as an option. Magnetic dampers are also optional, although the car we were driven in had fixed-rate steel springs – suggesting the engineers see it as the optimum setup. It certainly struck a good balance on track, floating down the straights and resisting roll in the bends. When we drove the Lamborghini Huracan on the same track a few months ago it felt edgier and stiffer, but no faster. 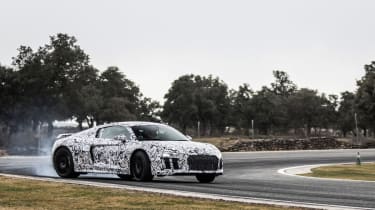 The chassis is shared with the Huracan, (although the wheelbase is stretched by 3cm) and uses the same combination of aluminium and carbon-fibre to cut the weight to 1,555kg - 50kg less than the old V10 Plus. The body panels are all aluminium, the fixed rear wing (specific to the V10 Plus, the lower-powered model gets a pop-up spoiler) is made from carbon-fibre and there’s are face-distorting carbon-ceramic brakes fitted as standard on the range-topping model. The chassis is around 40 per cent stiffer than the old car too, which explains the more compliant suspension but tighter body control. No photos of the new interior were allowed, but we had the opportunity to explore it undisguised – and if you like the new TT, chances are this will float your boat. A 12.3-inch TFT ‘Virtual Cockpit’ replaces the dials and can be configured in a variety of ways. Everything can be controlled from the multi-function steering wheel, or there’s a control wheel on the centre console if you prefer. A bank of switch and air-con controls sit above that… and that’s about it. It’s an exercise in extreme minimalism, and focused 100 per cent on the driver. 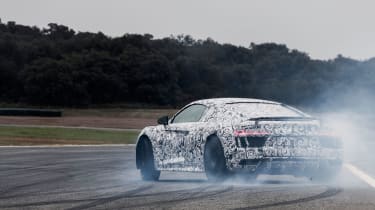 Four new buttons on the steering wheel form your control.  A large red button fires up the V10, another lets you switch the exhaust noise from ‘ear-splitting’ to ‘anti-social’ and one marked Drive Select let’s you toggle through the four driving modes – Comfort, Auto, Individual and Dynamic. Each tailors the throttle response, steering weight, gear change, ESC threshold, torque split of the Quattro system (it can send up to 100 per cent to either axle if required) and suspension stiffness if Magnetic dampers are fitted. The final ‘Performance’ button, marked with a chequered flag, turns things up another notch still and lets you choose between snow, wet and dry settings. As for the styling, well, we’ll have to wait until the swirly wrapping comes at the Geneva show to pass judgment, but its clear fine-tuning rather than a radical redesign is the order of the day. The proportions are remarkably similar to its predecessor, while slimmer LED headlights, a deeper and more angular grille and split front air intakes give it a pointier look form the front. The side blades appear to have been shrunk and at the rear a huge full-width diffuser sit below two trapezoid-shaped exhausts, while 20-inch wheels (19s on the lower-powered model) are squeezed into the arches. There’s even a nod to practicality with a 104-litre boot in the nose and a 120-litre ledge behind the seats that should be big enough for a set of golf clubs.