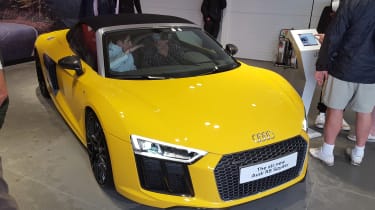 We first saw the Audi R8 Spyder at the New York Motor Show back in March, then in the UK for the first time at the 2016 Goodwood Festival of Speed, but now we've got full pricing information on the drop-top supercar.

The R8 Spyder costs from £129,990 and will hit dealerships from late 2016. Standard kit includes Audi's driving mode selector, multi-function leather steering wheel and a 12.3-inch digital display instead of dials that Audi calls its Virtual Cockpit.

Audi connect is also standard, bringing a host of connectivity options, plus smartphone integration for iOS and Android phones. There's a Bang & Olufsen Sound System on the options list that plays through the headrests, plus carbon detailing, LED headlights and the Sport Plus Pack that adds more dynamic steering, adaptive dampers and a sportier exhaust note. 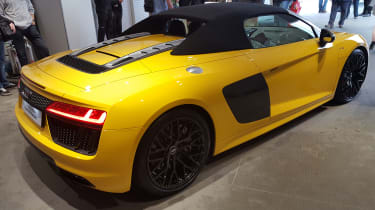 As you’d expect the R8 Spyder shares much of its exterior design with the fixed-roof Coupe, save for a few big tweaks. That means it gets the same gaping grille and sharp headlights, as well as identical gills in the bumper and bodywork.

Down the side you’ll notice the same subtle V10 badges, as well as the recognisable carbon air scoop. The rear haunches are notably different, though, with a long, wide deck housing the folding fabric roof.

Like the outgoing R8 Spyder, the drop-top gets rid of the glass panel above the engine from the Coupe and adds extra cooling vents to the extended rear panel. The fabric roof itself is very similar in design to the old car, with two buttresses on either side extending back onto the engine bay and a vertical rear window that retracts when the roof is lowered.

That cloth roof weighs just 44kg, and can open and close at up to 31mph in 20 seconds. Audi is claiming air turbulence has been reduced, with road and wind noise "much lower" than the old R8 Spyder. A synthetic textile wind deflector helps to reduce airflow around the head by around 90 per cent.

The whole car weighs 1,612kg dry, which is claimed to be 113kg lighter than the previous R8 Spyder thanks to the carbon-fibre reinforced spaceframe and additional stiffening to the A-pillar and sills. The kerbweight is estimated to be around 1,720kg, about 125kg more than the coupe. Torsional rigidity has improved by 50 per cent over the previous model. 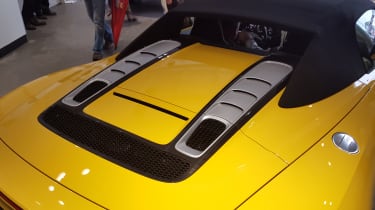 With the same 5.2-litre V10 as the hard-top pumping out 532bhp and 540Nm of torque, mated to the S-Tronic dual clutch autobox, this means the R8 Spyder can shoot from 0-62mph in 3.6 seconds. That's one-tenth down on the standard R8, with a top speed of 198mph just 1mph less than the coupe.

Claimed fuel economy is 10 per cent better than the previous Spyder, at 24.1mpg. CO2 emissions stand at 277g/km. We expect a more powerful 'plus' version of the R8 Spyder to debut towards the end of this year with 601bhp.

Like the Coupe, it features the TT’s Virtual Cockpit display inside, with no central screen. The same big red starter button sits on the flat-bottomed steering wheel, while the heater controls are placed below the dash-mounted air vents.

Check out our full review of the new Audi R8 hard-top here...