Power blasting technique leaves behind permanent etching in paintwork, and will be an option on other Audis soon. 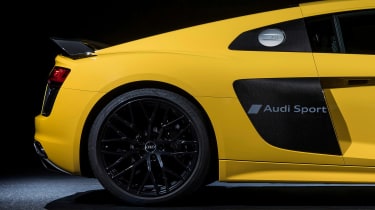 Audi has revealed a new customisation option for the R8, offering buyers of the supercar the option to have their own personalised mark left in the car’s paintwork.

Using a new patented etching technique, Audi can ‘blast’ any lettering or graphics into the lacquered surface of the side blades, and though it’s only available on the R8 for now, the company says it’s a mod which will become available on other Audi models in the near future.

Using a template to create patterns, a special powder is blasted onto the finished surface, gradually roughening the lacquer to a few thousandths of a millimetre. Once the process is completed, it leaves a matte look mark in the shape of the template behind.

The etched tattoos are much more robust and permanent than decals or paint, and because the process has to take place after the car has been painted it would be easy to incorporate into normal production, rather than at request. 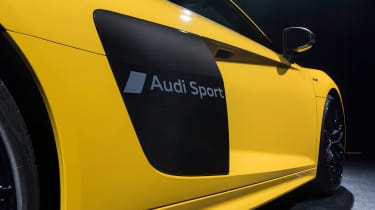 While the pictures provided by Audi show the R8 wearing rather tame Audi Sport logos, the company says it will etch any pattern requested by a customer so long as it doesn’t impede on any third-party rights.

Etchings don’t have to be on the R8’s side blades either – panels up to one metre long or wide can become canvasses for the process.

What personalised mark would you leave on your car, if you could? Let us know in the comments.