The S7 Sportback is the fastest version of the classy A7. Its twin-turbo V8 engine gives this luxury hatch serious punch 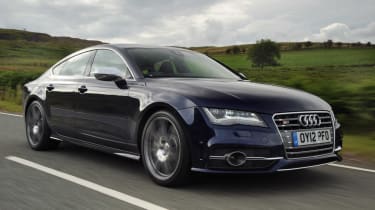 The Audi S7 is the performance flagship of the stylish A7 range. Sharing its twin-turbo V8 with the S6 and S8 it has 414bhp and 550Nm of torque. As you’d expect it’s matched to Audi’s quattro all-wheel drive, to deliver a very accomplished blend of blistering performance and confidence inspiring grip.

The beautifully designed and finished cabin is first-rate, while a pair of decent sized rear seats and a hatchback tailgate mean it’s a practical choice, too.

A beautifully appointed and comfortable cabin, effortless performance and loads of grip – the S7 has it all. The silky smooth character of the V8 engine is infused with a subtle V8 soundtrack, while the standard twin-clutch gearbox offers fast shifts. The standard Drive Select system allows you to fine-tune the steering, throttle, suspension and gearbox and while the Audi is accomplished rather than thrilling, it has great body control and feels pretty sharp for a car of this size. Standard air suspension ensures it rides okay, too.

Clever cylinder shutdown technology means when it’s not under heavy load, the large capacity V8 runs on only half its eight cylinders. Audi’s hi-tech artificial noise creation system means you never notice that you’re temporarily driving on four cylinders, while the tweaks help reduce emissions to 225g/km. However, the S7 is still in the 35 per cent tax bracket, so it isn’t a cheap company car choice. Combined fuel economy will realistically dip below the 30mpg mark, and while a Mercedes CLS 500 will fare better at the pumps, the Audi has better predicted residuals.

Combining the grand proportions of the standard A7 with the familiar trademark styling details of Audi’s sporty models, the S7 turns heads. Subtle badges, a chrome trimmed grille, metal effect door mirrors and a pair of twin exhaust pipes mean this performance coupe looks the part. LED headlights give it extra wow factor, while the chrome window surround highlights the sweeping profile of this classy Audi.

Compared to conventional coupes, and even similarly sized saloons, the S7 is very practical. With four very comfortable seats and decent headroom in the back, passengers are well looked after. The generous 535-litre boot expands to 1,390 litres when the seats are folded flat. There’s also the option to add a ski hatch between the rear chairs, but it’s the versatile hatch tailgate that gives the S7 its biggest advantage over traditional performance saloons.

Audi has a strong reputation for reliability and the S7 features components used across the range. Six airbags, xenon lights and parking sensors are standard. The full range of Audi’s active safety technology features on the options list. You can choose from active cruise control, lane departure warning and blind spot warning. There’s also the option to specify a head up display, a reversing camera or Audi’s speed limit display system. 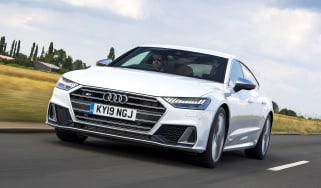 The latest Audi S7 has ditched its petrol V8 in favour of V6 diesel power. Is it still sporty enough?
New 2018 Audi S7 spotted at the Nurburgring 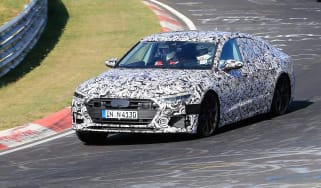 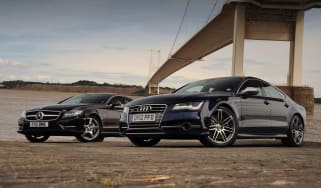 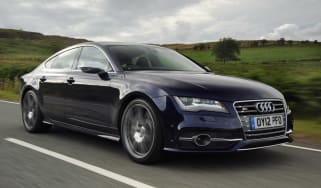 We get behind the wheel of the new flagship Audi S7, which gets a hi-tech V8 engine for huge pace
Skip to HeaderSkip to Content