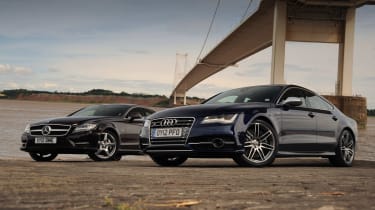 The Audi A7 Sportback follows the Mercedes CLS in attempting to bridge the gap between saloons and traditional coupes by mixing luxury, sleek looks and four-seat versatility.

The new flagship S7 adds huge performance to the mix. Powered by a 414bhp twin-turbo V8 that’s also used in the brilliant Bentley Continental GT V8, the four-wheel-drive Audi has blistering all-weather pace. Plus, it packs an upmarket cabin inspired by the brand’s luxurious A8 limousine.

On top of that, Audi’s trademark sporty styling cues leave you in no doubt about the car’s potential. The CLS 500 doesn’t need racy add-ons to turn heads, while its classy interior is one of the best around. And under the bonnet is another big twin-turbo V8, so it has the Audi covered for pace.

These two contenders are closely matched for price, power and kerb appeal – but which one is better?

Both these cars are enormously desirable. The S7 and CLS 500 look great and feature refined and powerful V8 petrol engines, which have economy and emissions figures that would have been the stuff of fantasy a few years ago.

These models stylishly blur the boundaries between coupe and saloon, plus their genuine four-seater interiors treat occupants to top-notch quality and executive levels of comfort.

There’s huge scope for personalisation in both models, plus you get plenty of plush equipment as standard. The Mercedes is the cleaner of the pair and every bit as fast as its rival – but the S7’s new V8 engine is a real gem. It’s smooth yet characterful, and combines with a dual-clutch gearbox, all-wheel drive and taut dynamics to ensure the Audi is the sportier choice here.

Yet the S7 gives nothing away in terms of first-class refinement. Add in the practicality of a hatchback tailgate, and it makes a lot of sense.

The CLS 500 is equally desirable, but it’s let down by its auto box, plus it doesn’t have the Audi’s grip or body control. So the new S7 takes victory by the smallest margin – although we’d understand if the Mercedes won you over with its more subtle charms.

Blistering performance is matched to sure-footed grip and executive comfort in the all-new S7. This is a winning blend that’s now a trademark of fast Audis. The handling could be more engaging and options are expensive, plus while the S7 is cheaper to buy here, it’s a more costly company car choice. But with its great V8, this is one of the finest S models yet.

Classic Mercedes attributes like refinement and luxury mark out the CLS, and it’s one of the most attractive cars the company builds. Decent running costs are another plus. Yet the saloon body hampers practicality, while it can’t quite match the all-round appeal of the accomplished Audi. It also struggles to rival the S7’s grip and composure through corners.