Twin-turbo V8 has transformed the Continental GT, so does it make more sense than the W12 on UK roads? 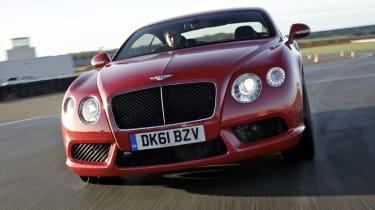 Forget the Continental GT W12. The V8 sounds better, drives with more verve and uses 40 per cent less fuel. It even costs £11,910 less. The Bentley coupe was already one of our favourite GT cars, but now it has some character to add to its exceptional comfort and refinement. It’s the sportiest car the company builds – and the best.

The Continental GT V8 is the least powerful car Bentley builds, but easily the most stimulating to drive. With a compact V8 engine in place of the 6.0-litre W12, it’s already impressed us on a Spanish race track. So can it repeat the trick on UK roads?
The V8 is no ordinary engine – it’s an all-new 500bhp twin-turbocharged 4.0-litre that’s shared with Audi’s S6, S7 and S8. It gives away 67bhp to the W12, but with so much low-down torque and searing pace at high revs it makes the car feel every bit as fast. It sounds miles better, too, with a bassy V8 burble at idle that rises to a howl approaching the red line. Adding a proper soundtrack is only a subtle change, but it instantly makes the Continental more engaging to drive.

A host of fuel-saving technologies means this car uses 40 per cent less petrol than the W12 model, too. A new eight-speed automatic gearbox shuffles seamlessly into a high ratio when you’re cruising around and reacts quickly when you use the paddles in manual mode. Direct-injection, brake energy recuperation and a system that shuts down four of the eight cylinders on light throttle loads (also used on the flagship Mulsanne limousine) all help to return figures of 26.7mpg and 246g/km. In the real world, though, you can expect fuel economy in the lower 20s.
With a smaller engine and less weight over the nose, this Bentley steers more crisply and reacts quicker to your inputs. It’s still very much a comfortable and refined GT – not a sports car – but it’s the best Continental yet for attacking a B-road.
Our test car also had carbon-ceramic brake discs (a £10,200 option) with immense stopping power, although the nose dives violently towards the asphalt when you really step on the pedal.
Telling a GT V8 from a W12 is easy if you know where to look; it wears a gloss black grille, three-section lower front bumper and red instead of black B badges. At the rear, chrome figure-of-eight tailpipes mark out the V8, while 20-inch alloys come as standard – the gorgeous 21-inch wheels on our test car are extras.
In the cabin, there’s the option of two-tone leather – supposedly to emphasise the car’s sporty character – and a handful of new trim choices. Regardless of the tweaks, this is still one of the best-looking and, thanks to the V8, best-sounding interiors in the business.
Share this on TwitterShare this on FacebookEmail