Does four-door coupe have the driver appeal to match its style? 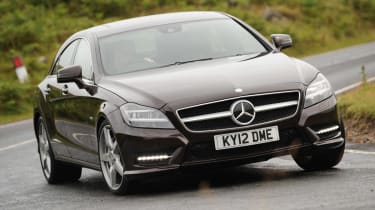 The original Mercedes CLS invented the four-door coupé class when it arrived in 2005. To some eyes, the second-generation car isn’t quite as distinctive, but by sharing the sleek profile and rounded roof of the original, it stays close to the winning formula – and rivals the new S7 in the desirability stakes.

This is especially the case with our CLS 500 Sport, where the single-bar grille, AMG body styling and 19-inch wheels add kerb appeal. Even so, it’s a more subtle proposition than the S7, which will be a plus point for some.

Inside, too, the Mercedes is a fraction more traditional than the Audi. Overtones of the S-Class limousine can be found in the analogue clock, top-quality materials and upmarket ambience. The low roof and slightly confined feel to the cabin remind you that the CLS is a different beast, but there’s enough room for two adults to sit comfortably in the rear. And while it lacks the Audi’s hatchback versatility, the 520-litre boot is well shaped, plus fold-flat seats can be added for £445.

The column shift for the automatic box frees up space on the transmission tunnel for the COMAND controller, which is as intuitive to use as the Audi’s MMI infotainment set-up. Overall, the straightforward layout has just about the right mix of modern gadgets and traditional materials and dials.

Yet while our test track figures show just how close these two cars are, the Mercedes doesn’t have the positive throttle response of the Audi, while the slower shifts of the automatic gearbox and narrower power band combine to make it feel slightly less spirited than the S7.

Plus, even in the manual setting, the conventional automatic gearbox is a little too keen to kick down and you don’t get the sporty downshift throttle blip of the Audi. The Mercedes doesn’t sound as good, either, although the smooth stop-start system ensures it’s clean and we averaged slightly better economy on test, at 20.9mpg.

You can switch the standard air-suspension between Comfort and Sport settings, but we’d stick to the latter as the ride is decent and overall refinement excellent. The car is quiet on the motorway and relaxing around town.

The Mercedes turns in well and feels lighter on its feet, yet isn’t as composed as the Audi on twisty roads, with more body movement. So while it could be more thrilling to drive, the way the CLS blurs the boundaries of comfort and performance is perfectly in keeping with a car that recreates the spirit of traditional four-seater grand tourers.

Chart position: 2Why? The sleek CLS 500 takes a more subtle approach than the S7, but with muscular twin-turbo V8 engine and catwalk style, it’s still a formidable opponent.