The Mercedes CLS 350 d is the entry-level model in the range, but it offers a great combination of price, speed and refinement 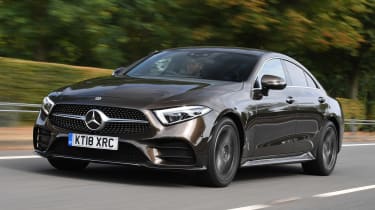 This entry-level 350 d is our pick of the new CLS range. It’s plenty quick enough, supremely refined, and cheaper than the flashier 400 d. It’ll waft its way to motorway speeds with ease, while the sumptuous cabin is comfortable and laden with technology. Unless the bigger badge is your be-all and end-all, this is the CLS we’d have.

Not content filling niche upon niche, Mercedes is now bolstering its sleek CLS line-up with extra engine options. We’ve already tried the flagship diesel and mild-hybrid CLS 450 petrol, and there’s an electrified AMG version on the way, too.

Surging to 62mph in just 5.7 seconds, the smooth and refined CLS 350 d is remarkably quick. Its standard-fit nine-speed auto box appears better resolved than some of Merc’s early efforts, too, continually selecting the right gear at the right time. Plant your foot at any speed and this CLS has plenty of torque in reserve for spontaneous overtakes. 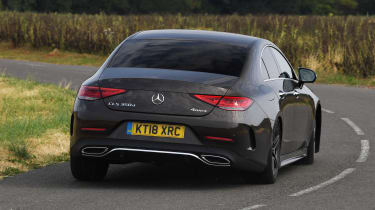 The steering isn’t all that responsive, but while that may mean it’s not enormous fun on a twisting B-road, it’s incredibly relaxing to drive on the motorway. The cabin is hushed – even on the standard-fit 19-inch alloy wheels – and the air-sprung ride is little short of sublime. Every version gets 4MATIC all-wheel drive, too, allowing you to deploy every last ounce of power as and when you need it.

Ok, so it’s not as fast as the 400 d, but it’s almost £3,000 cheaper – and fractionally more economical, too. The quoted CO2 emissions are identical, however, so company car drivers able to splash out on the quicker car shouldn’t see too much of a Benefit in Kind tax hike.

Of course, as the CLS is only available in AMG Line trim – regardless of engine choice – the cabin is laden with all the same kit. The fantastic dual-screen 12.3-inch infotainment system not only looks great, it works well, too. Admittedly, it’s not quite as intuitive as BMW’s iDrive system, but the touchpad control is operable in various ways and on the whole is easy to use.

There’s 64-colour ambient lighting, electro-pneumatic four-way lumber support for the carefully contoured leather seats, and brushed aluminium pedals. Despite being labelled a four-door coupe, room in the back is adequate, and the seats fold for longer loads, as well.

Other standard features include Merc’s Active Parking Assist system with a built-in reversing camera, and Agility Control adaptive damping. The Multibeam intelligent headlights are a particular highlight, too. Opt for the Premium Plus package and you’ll add a Burmester stereo, electric sliding sunroof and an online media system.