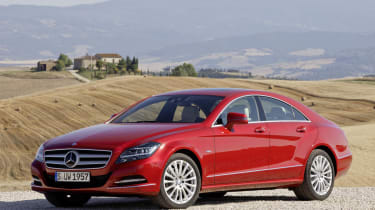 Price
£50,090 to £65,655
SPECIFICATIONS
When the original Mercedes CLS hit showrooms in 2005 it caused an instant stir. By mixing four-door versatility, sleek coupe styling cues and a luxurious cabin, the CLS was a true trendsetter. Now an all-new model aims to continue the success by adding sharper driving dynamics and efficient new powerplants to its list of desirable attributes.
[[{"type":"media","view_mode":"content_narrow","fid":"69892","attributes":{"class":"media-image"}}]]

Drivers wanting the ultimate in sporty driving dynamics should look elsewhere. However, the Mercedes CLS’s fine ride and handling balance strikes the right balance between fun and comfort. Adaptive damping is standard on all models. Entry-level versions get a 201bhp 2.1-litre diesel engine, while at the other end of the performance scale are the muscular petrol V8-powered 500 and AMG models – the later will blast from 0 to 62mph in only 4.4 seconds. Buyers can also pick from a pair of V6 engines – a 3.0-litre diesel and a 3.5-litre petrol.

Owners who want all the flash without forking out lots of cash should stick to the CLS 250CDI. The diesel-powered machine emits only 135g/km of CO2 and is capable of returning an impressive 54.3mpg fuel economy figure. The petrol-powered V8 versions serve-up crippling running costs, while all CLS variants suffer from poor residuals compared to rivals such as the Audi A7 and Porsche Panamera. As you’d expect for a premium car, servicing costs are likely to be pricey.

The new Mercedes CLS clearly takes its cues from its sleek predecessor. With its mix of sweeping curves and bold creases, the CLS packs more visual appeal than rivals such as the Audi A7. As with the previous model, the Mercedes CLS is available as a four-door saloon only. All versions get eye-catching LED daytime running lights, while Sport models are treated to 19-inch alloy wheels and racy looking bodykit.

Climb aboard and it’s clear the designers have made every effort to make the cabin as stylish as the exterior.  Not only is the Mercedes CLS’s cabin attractively designed, it’s also beautifully built and trimmed. A column-mounted gearchange results in an uncluttered centre console that stretches all the way to the rear of the interior, making the Mercedes a strict four-seater. Unlike the first generation CLS, the new model gets a bespoke dashboard that shares no parts with the firm’s traditional E-Class versions.

It’s unlikely that buyers of the Mercedes CLS are in the market for a practical hold all, so it’s no surprise to find the newcomer lacks versatility. The CLS is a strict four-seater, although there’s plenty of head and legroom for occupants. Opening the tailgate reveals a generous 520-litre load bay, but you’ll have to hit the expensive options list if you want a folding rear bench. At least the cabin is littered with useful storage, including a deep, lidded box in the centre console.

There has been no EuroNCAP test for the Mercedes CLS yet, but there’s no reason to think the newcomer won’t bag a five-star result. Included in the raft of standard safety kit are six airbags, ESP and tyre pressure monitoring. Mercedes has a reputation for strong build quality and mechanical strength – and the Mercedes CLS certainly feels like it will last. Standard three-year warranty is joined by the firm’s Mobilo scheme, which delivers breakdown cover for up to thirty years if you continue to have your car serviced at a Mercedes main dealer.