Merc’s CLS is a relaxed and luxurious cruiser in 450 4Matic form, but how does it cope on UK roads? 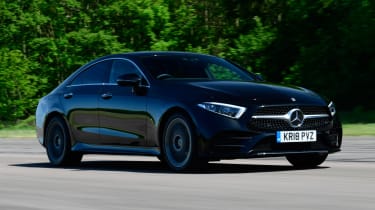 Merc’s smooth EQ Boost 3.0-litre petrol engine builds on the CLS’s credential as relaxed and luxurious cruiser, striking a great balance between refinement and performance. On UK roads and at low speeds, the ride quality isn’t as plush as you’d expect, however – a standard E-Class saloon is the better, cheaper and more practical in that respect.

What started as niche segment with the first generation CLS back in 2004, the four-door coupe market has now blossomed into a battleground between the German premium brands. Keen to demonstrate it knows best, Mercedes has now launched its third generation CLS in the UK.

We’ve already driven the 400 d and AMG CLS 53 on European soil, but this is our first chance to try the CLS 450 4MATIC petrol. It’s powered by Merc’s latest 3.0-litre six-cylinder engine, which incorporates clever mild hybrid 48v electrics (which Mercedes calls EQ Boost) to improve performance and economy. It’s available only with four-wheel drive and a nine-speed automatic gearbox.

Mercedes says the CLS 450 will hit 0-62mph in 4.9 seconds, but from the very moment the wheels begin to turn it’s clear this is a car focused on luxury and refinement rather than outright performance. 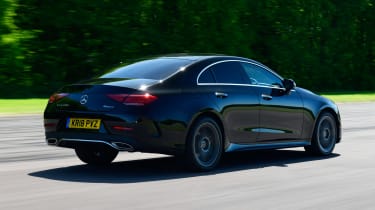 The engine is almost inaudible at idle and effortlessly sails its way up to 70mph with a delicate six-cylinder burble. It’s deceptively quick, in fact, helped by the EQ Boost system’s extra slug of power (250Nm and 22bhp) under hard acceleration.

The smooth transmission keeps things calm and serene as it works it way up through the gears at its earliest opportunity. But if you do decide to take control with the steering wheel mounted paddles, the gearbox can feel a bit labored with its changes. It does mean you shouldn’t have too much trouble achieving Mercedes’ claimed 36mpg; the low down shove and relaxed nature of the engine mean you rarely need full throttle.

The various driving modes change the car’s character. The Comfort, Sport and Sport+ settings make subtle adjustments to the car’s steering, gearbox and throttle response to sharpen things up. But the CLS is more at home in its default setting, where you can enjoy the graceful performance of the engine and supple ride quality. However, at lower speeds the CLS doesn’t iron out road imperfections quite so well – not helped by the big 19-inch alloys, which come as standard.

Another compromise you have to make with cars such as the CLS is practicality. The 490-litre boot is a rather awkward shape, while anyone taller than 6ft sitting in the back will feel a little snug – as that sloping roofline robs you of precious headroom. It’s also the first CLS to feature three seats in the rear, but a chunky transmission tunnel means it’s really only suitable for children. 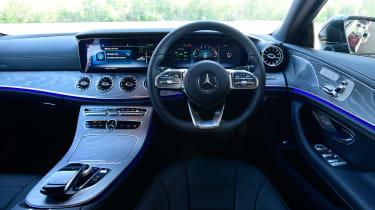 There will be few complaints about lavish cabin or tech on board, however. The CLS is as well appointed a penthouse suite in a boutique hotel; swathes of leather, textured wood and brushed aluminium cover every visible surface. A Burmester stereo, electric sunroof, 360-degree camera, Apple CarPlay and Android Auto come part of a £3,895 Premium Plus Package.

The only spec offered on the CLS in the UK is AMG Line, meaning all models come fitted with a full leather interior, twin 12.3-inch displays, sat-nav, climate control and 19-inch alloy wheels.