The new Mercedes CLS combines a sleek design with the practicality of a four-door saloon, but what’s it like on the road? 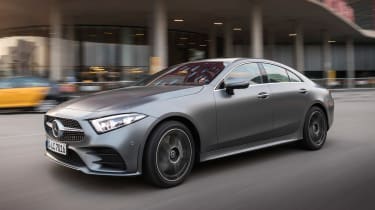 The new Mercedes CLS works wonderfully with such a strong and capable diesel engine. Thanks to the relaxed way in which it delivers its prodigious power, the 400 d really suits the smooth-riding grand tourer nature of this car – especially with the added security of the standard 4MATIC all-wheel-drive system. Despite all that performance, it promises to return just over 50mpg, too.

Not many cars can claim to have spawned a whole new class of vehicle, but it’s fair to say that without the Mercedes CLS, there would be no such thing as the Audi A7, BMW 4 Series Gran Coupe or Volkswagen Arteon.

This brand-new model is the third-generation CLS and, like the previous two, it sets out to combine the elegance and style of a coupe with the space and practicality of a four-door saloon. As we discovered when we drove the range-topping Mercedes-AMG CLS 53, it provides an attractive halfway house between performance and practicality.

However, there’s no doubt that more customers in the UK will go for one of the standard petrol or diesel models, so here we’re looking at the CLS 400 d. And while the AMG 53 doesn’t arrive until later in the year, less expensive versions such as this (as well as the 350 d and 450 petrol) are already on sale here. 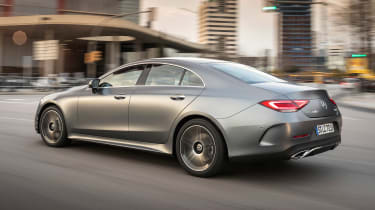 The 400 d isn’t just the most powerful diesel-engined CLS, it’s also the most potent diesel Mercedes has ever put into a production car. The vital statistics alone make pretty impressive reading: 335bhp and 700Nm, fed through a nine-speed auto and standard all-wheel drive. With a 0-62mph acceleration time of just 5.0 seconds, the diesel is only half a second slower than the AMG.

But for all that promise of great performance, what you notice first of all is just how relaxing this thing is to drive. That’s because all of the car’s torque is available from as little as 1,200rpm, so when you put your foot down, things happen pretty much immediately. With response as swift and as strong as that, you never have to work the engine hard to get the CLS going remarkably quickly.

That automatic gearbox is smooth, too, kicking down (on the rare occasions it needs to) quickly and efficiently. The car feels tremendously sure-footed in even the worst weather conditions as well. Throw in an extremely comfortable ride and excellent refinement and, overall, the CLS 400 d comes across as a tremendous grand tourer.

But this isn’t a vehicle to grab by the scruff of the neck and drive flat out. Instead, it’s about settling back and taking things a bit easier. It’s a luxury car that can transport you from A to B in the blink of an eye. And that feeling of being whisked in total comfort is supported by the exquisite cabin, which shares much with the E and S-Class saloons. 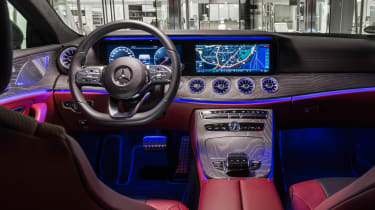 All cars include 12.3-inch digital dials and widescreen cockpit displays, as well as ambient lighting that can switch between 64 colours. There’s leather everywhere you look, while the quality of craftsmanship is second to none.

Every model gets 19-inch wheels, a parking package (including an HD reversing camera), Agility Control suspension and intelligent lighting. The £3,895 Premium Plus pack includes keyless go, electric seats, a Burmester stereo and an electric sunroof.

If you do plan on carrying passengers, all but the tallest adults will be perfectly happy in the back, providing you put them in either of the outer two seats. That said, as you would only expect, there is a price to pay for the sleek and elegant lines, and the CLS isn’t quite as spacious or as practical as an E-Class.