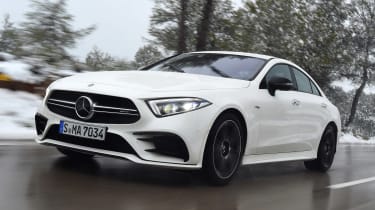 The Mercedes CLS fulfils its brief perfectly, making for a very effective halfway house between saloon and coupe. So, whether you want a more practical coupe or something that’s smarter and sharper-to-drive than a regular saloon, this new Mercedes will surely hit the spot. Likewise, with its effortless performance, comfortable ride and surefooted handling, the AMG 53 is a perfect flagship for the range.

Calling a car a four-door coupe may sound like a contradiction in terms, but with the arrival of the third-generation of the Mercedes CLS, it looks like the concept is here to stay.

As well its new look, the 2018 CLS also brings a range of new engines and more equipment – much of it inherited from its dearer S-Class sibling. And, while it boasts about improved practicality – claiming to be the first ‘five-seat’ CLS – it very deliberately looks like a member of Mercedes’ coupe family.

Those looks are what will grab your attention first, and the shape of this new CLS is much smoother than its predecessor’s, with fewer lines in the bodywork. The sleek styling is completed by slim LED headlights and two-section rear lights. 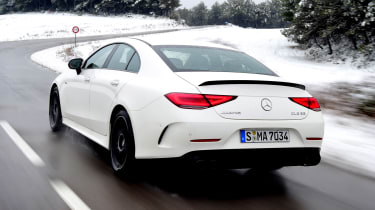 Initially, only six-cylinder engines will be available, but four-cylinder units will join the range at the end of the year. For our first experience of the car, we’re trying the mild hybrid Mercedes-AMG CLS 53, which will arrive in September – four months after the 350 d, 400 d and 450 petrol versions.

It stands out from lesser CLS models thanks to its unique styling, including the chrome twin-blade radiator grille previously reserved for V8 Mercs. Meanwhile, the front apron has an A-wing design, the round exhaust tailpipes are trimmed in chrome and, inside, the sports seats have unique upholstery and red seat belts.

The cabin is certainly a very classy place to be, with high-quality materials and lots of features that are immediately recognisable from the E-Class and S-Class. There’s plenty of head and legroom in the front, too, as well as reasonable space in the back. 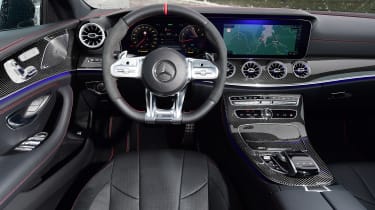 However, as you can imagine, that swooping roofline means the CLS isn’t quite as spacious as a conventional saloon, and anyone over six-foot tall sitting in the back will find their head rubbing the roof lining.

Plus, despite the claims, you’ll really struggle to fit three across the rear; the transmission tunnel in the floor is too big and the centre seat too narrow for anyone to sit there comfortably for any length of time. Likewise, while the boot is a decent size, it’s not the easiest to load and unload, thanks to the relatively narrow opening and high lip.

Perhaps the most impressive part of the CLS 53 is the 3.0-litre six-cylinder petrol engine and its pair of turbochargers: one a traditional exhaust gas charger, the other an electric compressor. It’s the first-ever hybridised AMG, in fact, though all future 53-badged models are expected to follow suit.

All together, that’s enough to produce 429bhp and 520Nm, with an ‘EQ Boost’ electric starter-generator able to add 21bhp and 250Nm of torque when moving off. The EQ Boost also works with the electric compressor to build up a high charge pressure before the larger turbo kicks in, eliminating lag.

On the road, the result is instant and effortless response as soon as you push the accelerator. Mind you, much of the credit for that must go to the ‘intelligent’ four-wheel drive system, which ensures the best distribution of torque between the wheels – giving superb traction in any weather. 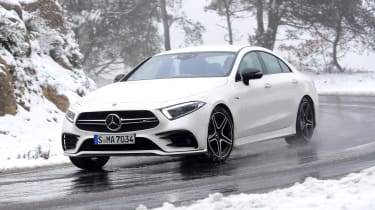 That means the CLS is very fast across country. You can get onto the power quickly as you accelerate out of a corner, confident that there will be no wheelspin even in slippery conditions. The nine-speed automatic gearbox is smooth and quick to respond, too, particularly with the car in Sport mode, and a soundtrack pops and roars from the exhaust pipes to encourage you on your way.

As you can see from the pictures, some appalling weather accompanied our test drive in northern Spain, but the CLS was never anything other than totally sure-footed. True, it’s not quite sports car-sharp through the bends, but it’s certainly more agile than a regular saloon.

On top of that, when you knock it back into Comfort mode, it also proves to be an excellent car for travelling long distances, thanks to the smooth ride and excellent refinement. And that’s despite the non-standard winter tyres that were fitted to our test car.