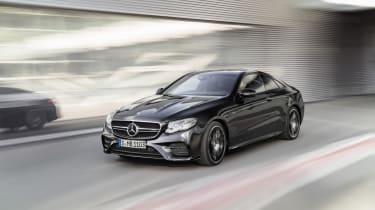 The hybridised 3.0-litre straight six engine features a pair of turbos: one is a traditional unit, the other is an electrically-charged compressor. The electric assistance, known as EQ Boost in Mercedes-speak, chips in with up to 21bhp and 250Nm from the moment you touch the throttle. 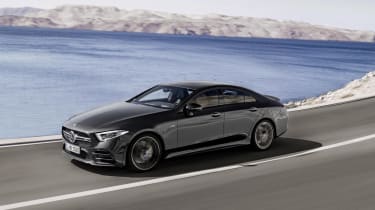 Petrol and electric systems combine for a total of 429bhp and 520Nm - enough to give the E 53 Coupe a 4.4-second 0-62mph time. Both the Cabriolet and CLS variants take one tenth longer, while all three are limited to a top speed of 155mph.

The new model is available with 4MATIC+ four-wheel drive and a nine-speed automatic transmission only. The gearbox has been retuned by AMG for faster shifts and features the ability to double-declutch and perform multiple downshifts, for greater driver involvement.

Inside, all AMG 53s get a pair of 12.3-inch display screens (one for driving data, the other for infotainment functions), a 360-degree parking camera and black Nappa leather seats with red contrast stitching.

In other news, Mercedes has also confirmed a new diesel model for the E-Class Saloon and Estate. The E 400 d takes the place of the outgoing E 350 d, producing 335bhp and 700Nm - increases of 81bhp and 80Nm respectively. It’s enough to slash seven tenths from the 0-62mph time - now 4.9 seconds for the saloon and 5.1 seconds for the estate, though at 48.7mpg, the claimed fuel consumption has taken a small hit. The E 400 d Saloon is priced from £52,685, while the Estate commands an additional £2,000.

Order books for both the new diesel and the AMG 53 variants are open now, with first deliveries due in September.