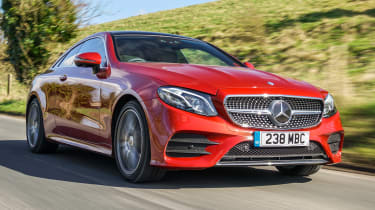 As quiet, flexible and refined as this Mercedes E 350 d diesel is, for most it’ll be hard to justify the near-£10,000 premium over the entry-level 2.0-litre. If you must have a big and powerful executive coupe, however, there’s little reason to look elsewhere. It’s silky-smooth, seriously quick and super comfortable – but despite the bigger engine, the E-Class Coupe is still no sports car.

We first drove the Mercedes E-Class Coupe on UK roads earlier this year, and while we couldn’t fault its luxurious character, it didn’t offer much in the way of sporting sparkle.

Our initial taste came courtesy of the entry-level four-cylinder E 220 d. But now we’ve been given the keys to the more powerful V6 diesel version to see if the extra grunt makes it a more athletic alternative.

The E 350 d commands a premium of almost £10,000 over the basic Coupe, but for that you get an extra 63bhp and 220Nm of torque, as well as Merc’s 4MATIC all-wheel drive system as standard. As is the case with the cheaper car, the E 350 d is only available in AMG Line trim. 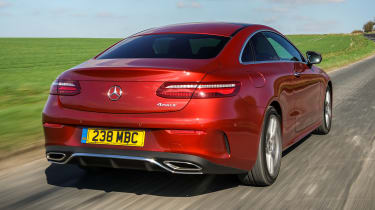 As soon as you push the starter button, it’s clear the V6 model is a quieter and more refined car. It ticks into life with little more than a murmur, and settles into a near-silent idle. Little changes on the move, either, where the 350 d remains a hushed and extremely relaxing way to travel. It certainly feels more luxurious than the comparatively clattery (but still well resolved) four-cylinder model.

Performance takes a step up, too. The smooth V6 picks up pace at an alarming rate, with huge torque reserves for speedy overtakes. Officially, 0-62mph takes six seconds (versus the 220 d’s 7.4 seconds) but in reality it feels far faster.

Just like the entry-level car, it appears Merc’s talented engineers have continued to tune the E-Class for comfort rather than outright agility. It feels like a really big car on the road, and the light steering and soft suspension fail to instil true confidence through the bends. Grip from the 4MATIC system is impressive, however, which is welcome at this time of year.

The now familiar nine-speed auto suits the car’s relaxed nature, as does the E 350 d’s standard-fit all-round air suspension. In fact, aside from its bigger S-Class sibling, little else on sale today is quite as capable on long motorway journeys. The soft, sumptuous leather seats are beautifully supportive and extremely comfortable – adjustable in almost every direction using the electrically operated door-mounted controls. 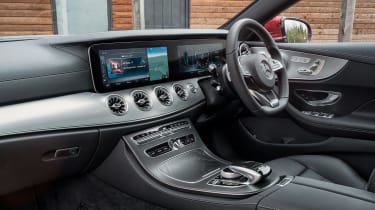 The widescreen 12.3-inch cockpit display is a £495 extra, while our car also featured Merc’s Premium Plus package. It’s expensive (£3,895), but adds a panoramic roof, a fantastic Burmester surround sound system and the firm’s excellent upgraded Mutlibeam headlights. They work brilliantly – illuminating or extinguishing individual LEDs to prevent you from dazzling oncoming drivers at night. The semi-autonomous Drive Pilot software forms part of the £1,695 Driving Assistance pack.

Materials and cabin quality is unchanged from the basic car, with every V6 model coming beautifully trimmed from tip to toe. There’s even enough room for adults to sit in the rear thanks to the recessed roof allowing for increased headroom. The boot is a decent size, with the 425-litre load bay even trumping family-focused hatchbacks like the Volkswagen Golf.