Traditionally a great cruiser, can the Mercedes E-Class Coupe also raise a smile with its driving experience in E 220d guise? 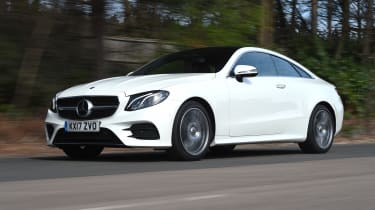 The new Mercedes E-Class Coupe doesn’t disappoint as a comfortable cruiser – even on broken British roads. It’s a great-looking car with a top-notch interior and a very calm, composed drive, but the trade-off is that it doesn’t feel particularly sporty. However, rock-bottom running costs and unquestionable style make it a great all-rounder.

The Mercedes E-Class is one of our favourite large saloon cars, mixing a classy interior with a composed drive and a strong range of engines. That doesn’t automatically mean we’ll love this new Coupe model, but with such a good base, what could go wrong?

We first drove the car in Spain last month, and came away impressed with the coupe’s refined, calm and cosseting character. Happily, that stands true back in the UK, even on our notoriously rutted roads. Our test car was fitted with standard springs rather than the pricey adaptive air suspension (a £1,495 option), but even on bumpy roads we found the big Merc to be very comfortable indeed.

The ride is a little firm at low speed, but push on and it irons everything out very well – even larger potholes. The E-Class does feel very big here in Britain, though, as our smaller, tighter roads start to make the Mercedes’ sheer size a bit of an issue. 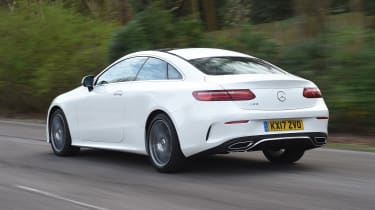 That makes driving quickly in the E 220d a bit tougher, and the heavy kerbweight (1,735kg) does mean it isn’t particularly agile. The body rolls as you dip into a corner, and while the steering feels nicely weighted it isn’t as sharp as you might want from a car that looks as sporty as this.

Still, the Mercedes is composed, grippy and planted when you’re driving faster, and the low driving position gives a better sense of speed than in the saloon or estate versions. The 220d is torquey low in the rev range, which means a squeeze of the throttle is all that’s needed for a quick motorway overtake. It has just about enough grunt - 191bhp and 400Nm of torque - to enjoy on a twisty road, but those after a bit more performance might want to take a look at the E 300 or E 400 petrol models.

Still, this diesel is incredibly refined on the motorway. The nine-speed automatic gearbox is designed to maximise efficiency, it seems, short-shifting where appropriate to keep the revs as low as possible. It swaps cogs smoothly and quickly, and is just as good here as in most of Mercedes’ current line-up. The true benefit, however, is the impressive 70.6mpg fuel economy and low 106g/km CO2 emissions.

The sleek looks and high-quality interior carry over from the saloon. The cabin is nearly identical to the four-door, featuring the same wide dashboard design and leather-lined dash. Our car was fitted with the superb dual-screen infotainment system and instrument display, too.

Passengers in the rear seats will be fine for legroom, but that sloping roofline means headroom is a bit too tight for longer trips. Climbing in the back is a bit of a pain as well thanks to the slow-moving electric seats. If it’s raining, you’ll get wet waiting for them to move.

The 425-litre load bay is actually smaller than the Audi A5’s 465-litre space, even though that car’s technically in the class below, but it’s a still a decent size and usable shape.