The BMW Concept Active Tourer was revealed at the Paris Motor Show last year, and previews BMW’s first front-wheel drive car. Now there’s a new version of the concept that is a step closer to the production car that will arrive in the second half of 2014.

The finished model is likely to use the new 2 Series badge, possibly 2 Series GT, when it arrives first as a five-seater, then as a longer seven-seater model. But the new show car is called the Concept Active Tourer Outdoor, and will debut at the OutDoor Freidrichshafen fair in Germany this month.

The new concept is designed to show-off how spacious the car is, so it’s been fitted with a special bike rack, which allows two road bikes to be transported inside the car. This keeps them clean and reduces any extra drag caused by using a rack on the roof or mounted to a towbar and therefore increases fuel efficiency.

The rack includes a clamp that is integrated above the left rear wheelarch. This slides out, and then turns by 90 degrees, allowing the bikes to be secured in place. It also holds the bikes at a decent level for maintenance, although the clamp only holds the bikes with their chainsets towards the car, preventing you from reaching them.

With the 40:20:40-split rear seats folded flat, the bikes can then be turned and reversed backwards into the car. The bike’s front wheels have to be removed and clipped to a brace that hinges up from the rear seats, and the saddles fit in a small underfloor storage area.

The storage area also houses charging cables for the smartphones mounted on the bike’s handlebars. As part of BMW’s ConnectedDrive, routes can be sent to the sat-nav that include both the part to be driven and the part undertaken by pedal power.

The most obvious change is the switch from dull grey to bright paint that BMW calls Gold Race Orange. This does a better job of showing the car’s creases and curves that make it look a lot more dynamic than its main rival, the Mercedes B-Class.

The new concept remains very close to the B-Class in size, but is 16mm taller than the previous CAT. It now features a conventional panoramic glass roof, rather than one that could switch between clear and opaque at the touch of a button.

Some concept elements remain, like the drag-reducing ‘Air Breather’ in each of the doors, which is only of more benefit on larger cars; the 20-inch wheels, and the exhausts that pop out of the bumper. Expect these to be toned down for the production model in 2014.

The interior is still a little outlandish in terms of some features and colours, but the finished version will keep the layered effect of the dashboard that curves towards the driver and away from the front-seat passenger.

The hybrid powertrain remains unchanged, and is close to what will be offered in the production car, alongside regular petrol and diesel engine options. The hybrid system uses a 134bhp 1.5-litre three-cylinder engine to power the front wheels, while the rears are boosted by a 67bhp electric motor.

The system switches automatically between petrol power, electric power alone – which gives a range of around 19 miles – or both in tandem. BMW claims a 0-62mph time of less than eight seconds and a top speed of 125mph, while also returning a claimed average of 113mpg and emitting less than 60g/km of CO2.

From electric cars to supercars, this is our list of the best new cars coming in 2021
BMW M235i Gran Coupe vs Mercedes-AMG CLA 35 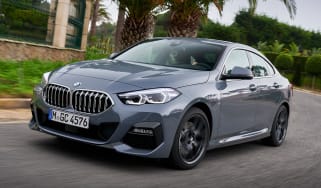