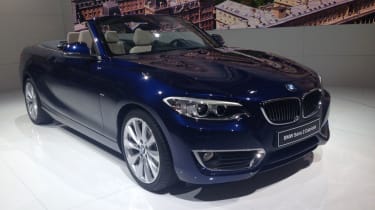 The replacement for the popular BMW 1 Series Convertible, the 2 Series, has been revealed at the Paris Motor Show. This is the third car in the all-new BMW 2 Series line up, joining the 2 Series Coupe and 2 Series Active Tourer models. The 2 Series' predecessor sold more than 130,000 units worldwide, so BMW has high hopes for its drop-top replacement.

From launch, four engines will be available in the Convertible, the range consisting of the 220i petrol with 184bhp, a 228i with 245bhp, a new 220d diesel engine with 190bhp and, for the first time ever, an M235i Convertible variant with 326bhp. 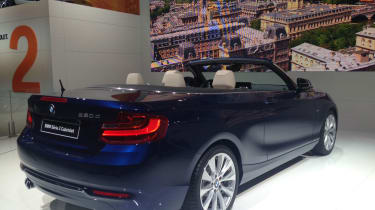 The usual BMW EfficientDynamics treatment has been given to the 2 Series Convertible, with fuel-saving additions including start-stop technology, brake energy regeneration and BMW's ECO PRO mode which gives tips on how to drive economically through the Proactive Driving Assistant. The 220i and 220d models will be available in Sport, Luxury and M Sport trims, while the 228i is offered only in M Sport guise.

Compared to the old model, the 2 Series Convertible is 72mm longer and 26mm wider, with a 30mm longer wheelbase. This should mean greater interior space and access for passengers, especially in the rear. The electrically-powered roof lowers and raises in 20 seconds, and can be operated at speeds of just over 30mph. Boot space in the 2 Series has improved over the 1 Series, too, at 335 litres. 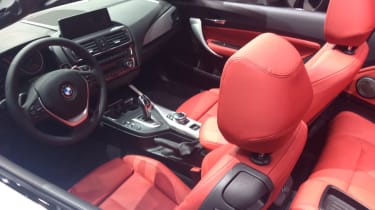 The interior will be familiar to anyone who's been in a current 1 Series or 2 Series Coupe with a driver-focused layout and BMW's iDrive controller connected to a standard 6.5-inch central display. A new addition to the 2 Series and, indeed, for any BMW, is a new navigation system which updates navigation data wirelessly and for free through the built-in SIM card.

The BMW 2 Series Convertible will go on sale at the end of February next year, with a starting price of £29,180 for the 220i Sport Convertible.

Click here to read our review of the BMW 2 Series Coupe...