BMW 3 Series GT: what's it like to live with?

Our man’s a big fan of the BMW 3 Series GT, and is sorry to see star player leave 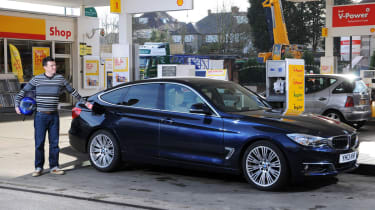 Forget match of the day – I’m more interested in hatch of the day. Because when it comes to premier league five-door motoring, the BMW 3 Series Gran Turismo is one tough opponent.

Unfortunately, the 328i GT is leaving our fleet, which is a real shame, because I’ve realised it’s a far more relevant car than I initially gave it credit for.

If you’d asked me eight months ago to rank the 3 Series GT, saloon and Touring in order of preference, the hatch would’ve come third. But that’s the point of these reports – they give you time to uncover a car’s strengths and weaknesses.

Admittedly, the 3 GT has a bit of an image problem – as a result, BMW has only sold 2,183 since last April’s launch, and shifted 163 last month, compared to 1,320 saloons and 673 Touring estates. But I think if dealers pushed a bit harder, they could convince more buyers to spend the extra £1,000 over the Touring.

Buyers like my sister, who considered a new 3 Series Touring a few years ago, but found it wasn’t quite big enough in the back for her kids. She went for a far more expensive 5 Series Touring – yet the 3 GT would’ve fitted perfectly.

I never fully appreciated the spacious rear seats, but the big boot was great while I was renovating my flat. Features like the flat floor, with a slot beneath for the parcel shelf, and the boot-mounted seat releases show the thought that’s gone into this car.

Our model had £11,840 of options, too, but you could halve this and still get a great car. Just be sure to add the £1,990 Professional Navigation Pack: its big map display looks awesome and makes cutting through rat runs easy.

But the thing I’ll miss most about the 3 GT is its all-round brilliance. In town it’s super comfy and easy to drive, on the motorway it’s swift and quiet, and it’s as much fun as a sports car on a B-road. As I said, it really is the hatch of the day.