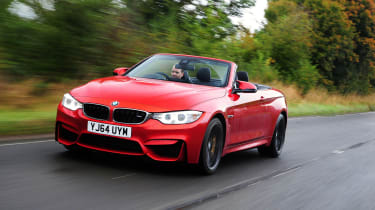 The new M4 Convertible is faster, more efficient and significantly sharper to drive than its arch nemesis, the Audi RS5 Cabriolet, but it’s still not perfect. Don’t buy it expecting the same cat-like reflexes as the Coupe – the extra 178kg it has to carry puts paid to that – although that’s not necessarily a bad thing. This is aimed at those who want the kudos of an M car, but don’t intend to drive it at ten-tenths.

Testing a 425bhp, rear-wheel-drive cabriolet in the driving rain is never going to be ideal – but then again, this is our first UK drive of the new BMW M4 Convertible, so it’s fitting to expose it to some typical British weather.

It follows the M4 Coupe and M3 saloon, and BMW is expecting to sell around 600 models per year in this country – putting it somewhere between the two in terms of popularity.

The powertrain is identical to its siblings’, so it consists of the same 3.0-litre twin-turbo straight-six engine, sending 425bhp and 550Nm of torque to the rear wheels through a seven-speed, twin-clutch auto gearbox. The aggressive front end, power bulge in the bonnet, quad exhausts and ‘M side gills’ are all carried over and blended beautifully into the convertible silhouette.

It gets the same M-specific three-stage adaptive suspension, three levels of electro-mechanical steering assistance, three increasingly severe settings for the gearbox and throttle response and three stages of stability control as the Coupe and saloon, plus the same limited-slip differential and uprated brakes. So you’d be forgiven for thinking it would be more or less identical to drive – but you’d be wrong. 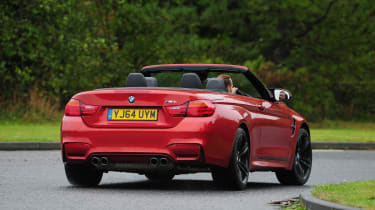 Despite BMW’s best efforts to keep the car’s weight down, the incredibly complex folding hard-top mechanism means it tips the scales at a hefty 178kg more than the M4 Coupe (1,730kg) – and at this end of the performance spectrum, weight is everything.

As a result, acceleration doesn’t feel quite as visceral. This is still a seriously quick car, but the combination of turbos and the extra weight means throttle response could be sharper. In corners, the steering feels agile and loads up nicely, but you can sense the suspension struggling to control the mass as well as the Coupe through compressions and over crests. On the plus side, with the roof down there’s nothing wrong with the metallic rasp from the exhausts.

The M4 packs all the components of a serious performance machine (the gearbox is brutally fast and slams home cogs with a kick to the back in its most aggressive setting, for example), but it prefers to take things easier. Switch all the electronic safety nets off and dial the chassis and powertrain to maximum, and you can cover ground supremely quickly with a grin on your face, but it always feels more comfortable playing the fast cruiser, rather than the race car.