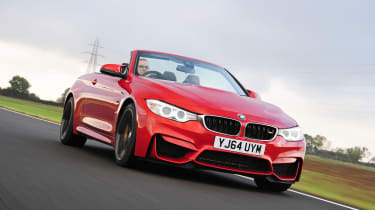 The BMW M4 Convertible is the drop-top variant of the M4 Coupe, powered by the same 3.0-litre twin-turbo straight-six, which produces 425bhp. With a complicated hard-top roof mechanism on board and a bit of chassis strengthening, the Convertible weighs 178kg more than the Coupe, which has a clear impact on handling and body control, but there's still fun to be had.

The engine still delivers a devastating hit of acceleration, and is happy to spin up the rear tyres for long drifts, but the sound could be better. Amplified through the speekers it sounds synthetic with the roof up and too muted with it down.

Despite its more relaxed demeanour, this is one M car that will find plenty of homes – BMW is expecting just under half of all its M4 sales to be of the Convertible variant. With some extra wind-in-the-hair thrills, it’s easy to see why.

First things first: the differences between the Convertible and the Coupe. The drop-top version weighs 178kg more than its hardtop sibling, which clearly has an effect on performance. With the seven-speed dual-clutch gearbox fitted, the Convertible can sprint from 0-62mph in 4.4 seconds, which is three-tenths down on the Coupe. In reality, though, it feels so fast and there’s so much performance whenever you need it, that we doubt you could ever feel the difference. 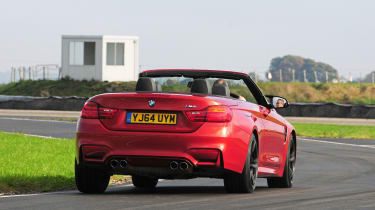 However, when you first step on the brakes hard you’ll notice the Convertible doesn’t quite have the urgent stopping power of the Coupe, but by any other marker it’s still pretty good. The handling is also lacking some of the sharpness you get in the hardtop M4 - there's more bodyroll for example and the car can get unsettled over big crests and deep compressions. Even so, you can still feel the 'M' DNA and you’d still have to say this car is the best handling four-seater convertible you can buy.

There’s masses of grip from the front wheels and the nicely balanced chassis makes it easy to light up the rear tyres and coax the Convertible in to a slide. Using the different settings for the suspension, steering and powertrain you can transform the M4 from a pretty serious and uncompromised sports car, in to one that you can easily use every day. In that sense, it’s a pretty compelling all-rounder that has a broad enough dynamic abilities to keep most drivers interested.

Compared to the old 4.0-litre V8 that powered the M3 Convertible, the new 3.0-litre twin-turbo six-cylinder in the M4 is a much better prospect for running costs. Bear in mind this is still a pretty serious performance car and you can’t be too disappointed by the 32.5mpg fuel economy or 204g/km CO2 emissions. Opting for the six-speed manual gearbox  actually worsen both of these figures to 31.0mpg and 213g/km of CO2.

Company car buyers will have to be prepared to shell out plenty of cash in BiK – over the course of a year a high-rate earner will be taxed £8,276. On the plus side, insurance group 45 is relatively low – most cars with this kind of performance are in group 50.

BMW offers a five year fixed-price servicing scheme for £1,000 or another that includes the cost of maintenance for £3,460, which covers things like brake discs, pads and windscreen wiper blades.

While the standard 4 Series has understated aggression that helps it to stand out from the 3 Series saloon, the M4 benefits from visual muscle to back up its added performance.

There are bulging wheelarches to cover the wider front and rear tracks and bigger tyres, while the front features gaping air vents and a power bulge in the bonnet. At the back, there’s a heavily sculpted rear bumper and two pairs of exhausts jutting out from underneath.

With the roof up, the M4 Convertible doesn’t quite have the same flowing roofline as the M4 Coupé due to its longer bootlid and the smaller rear window of the folding top.

Climb inside, and the M4 Convertible has the same interior layout as any other 3 Series-based model meaning it’s easy to get along with. Navigating the menus on the centre console display is also simple thanks to the iDrive controller behind the gearlever. The M4 comes with leather as standard, while a neat neck heater for the front seats is a £360 option, although it’s a bit much that BMW sees fit to charge £265 for a wind deflector to sit over the back seats.

The BMW’s folding top is piece of art in itself. The three-piece roof takes 23.8 seconds to fold, but it looks balletic as it opens and the assorted electric motors whir and rotate different sections into place.

The M4 Convertible is a four-seater, and there is enough room for adults in the back seats, but it’s better to use it more as a two-seater if you plan on going top-down a lot. That’s because you can fit a wind deflector across the back seats that allows you to travel at motorway speeds with practically no wind buffeting.

There’s a maximum of 370 litres on offer, and while that’s reduced to 220 litres when the roof is stowed, there’s a button on the bootlid that lifts the folded top out of the way to let you load items underneath. 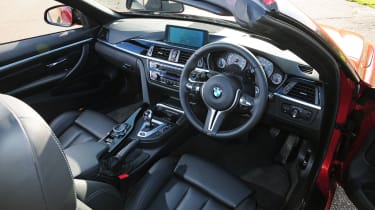 The back seats are designed for two, as there’s only a pair of seatbelts and a foldable armrest that bisects the rear, while headroom is tighter than in the M4 Coupé thanks to the shorter roofline and smaller back window.

Up front, it’s comfortable and there’s decent storage, too, while standard parking sensors mean it’s easy to get the M4 in and out of tight spaces.

The latest BMW M4 is based on the same basic platform as the 3 Series, which has been on sale since 2012 and underpins six different bodystyles. However, the M4 is custom built by BMW’s M division using bespoke, race-derived parts, so you would expect it to be finished to the kind of high standard that will help to improve reliability.

The M4 Convertible comes with six airbags as standard, while pop-up roll hoops are deployed automatically if the electronics detect that the car is about to roll over. That’s highly unlikely thanks to the M4’s advanced chassis and stability control systems. 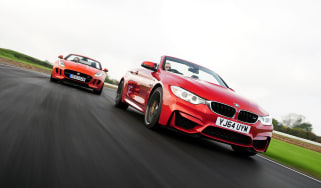 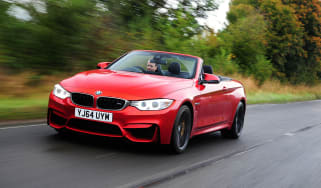 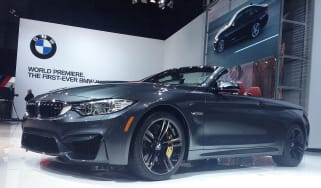 BMW lifts the lid on its mighty new M4 Convertible in New York. It goes on sale in September for priced from £60,000
Skip to HeaderSkip to Content