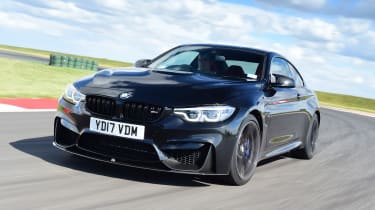 All BMW M4s fitted with the dual-clutch gearbox come with Launch Control as standard. Engage it, floor the throttle and step off the brake, and you’ll realise how ferociously powerful the car is. There's a manual model, too, but this accounts for only a small proportion of sales. The car rockets off the line, managing 0-62mph in just 4.1 seconds (4.3 for the manual) and quickly on to a limited top speed of 155mph.

Buyers wanting to go faster can choose the Competition Pack version, which adds 19bhp and shaves a tenth of a second off the 0-62mph time for both manual and DCT gearbox-equipped models. You can also pay extra to have the electronic speed limiter’s threshold raised to 170mph. Ultimate thrill seekers should opt for the (now sold out) GTS model, which upps power to 493bhp and reduces the 0-62mph sprint to just 3.8 seconds. It'll cost you, though, as the M4 GTS is more than twice the price of a standard M4 and should now be considered a modern classic. However, our favourite version is the M4 CS, which has a series of tweaks to the engine, suspension and steering that allow the driver to get the very best from what the M4 has to offer.

Put the suspension and throttle in their most performance-focused settings and the M4 is an absolute blast to drive. It grips so hard in corners that you’re constantly waiting for it to understeer, but it never does. You can also adjust the steering weighting to suit conditions, but it feels too heavy in the sportiest setting, so its best left in Comfort, which delivers more than enough refinement.

As with all BMW M models, you can use some of this car’s prodigious power to coax the back end into a slide – although you’ll need to be quick with your corrections because the rear tyres break away quickly. Despite being the most powerful, the GTS actually feels grippier, thanks to super sticky rubber on the rear tyres. If you know what you're doing, you can still get the tail out on tight hairpins, though. 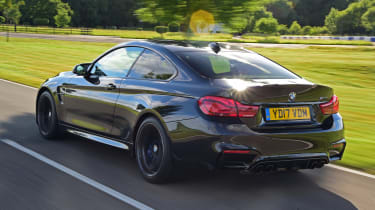 The adaptive dampers on all models deliver rock-solid body control and very little roll – although the ride is firm in the Sports Plus setting. Put everything in Comfort and the M4 is almost as refined and relaxed as the standard 4 Series, making light work of long motorway journeys and congested city commutes.

The Competition Pack model feels even sharper to drive. Even with the dampers in their softest setting the ride is firm, and the whole car fizzes and vibrates over the smoothest surfaces. The trade-off for this stiffness is even greater agility and involvement. In the dry, the recalibrated differential delivers greater traction, but with the stability control disabled it’s still possible to get the rear wheels smoking. In the wet, the traction control fights wheelspin in the first four gears. This hardcore approach won’t be to all tastes, but there’s no denying it delivers an even more exciting driving experience.

The most controversial aspect of this M4 is its engine, which features turbochargers for the first time. However, diehard M car fans have nothing to fear, as it’s sensational. The partly synthesised exhaust note in Sports Plus mode is slightly noisy and has an artificial sound, but the performance potential isn’t in doubt.

Then there’s the way it revs. Despite its turbocharged design, the 3.0-litre straight-six has the same insatiable appetite for hard work as the last M3's naturally aspirated V8. Yet, because there’s so much more torque, the M4 delivers blistering acceleration even when you keep the revs down.

The 3.0-litre engine is available in four states of tune. The standard car comes with 425bhp, the Competition Package models ups this to 444bhp, with the CS developing 10bhp more, while the (now sold out) limited-run GTS puts out 493bhp.

A sports exhaust is standard on the Competition Pack cars and an option on the standard model. Purists will find its bombastic crackles, pops and deep growl a little artificial, but it adds to the drama both inside and outside the car. For us, the CS is the best-sounding version, as its more mechanical and industrial (in a good way) engine note vibrates through the cockpit more naturally thanks to the omission of any sound-imposer software.

All cars come with a six-speed manual gearbox, but most buyers specify BMW’s M-DCT seven-speed twin-clutch gearbox. In auto mode this unit delivers silky smooth shifts, yet use the steering wheel-mounted paddle shifters and you benefit from searingly quick manual changes.