If you bought a new 6-Series, then chances are you'd want people to see you in it. After all, the latest 6 is the best interpretation yet of BMW styling boss Chris Bangle's design language; universally praised, it looks bold and unconventional while retaining the elegance all good grand tourers portray. 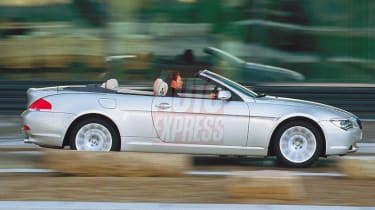 The 6-Series is one of the best BMWs in years, and the soft-top has even more appeal. But while the 4.4-litre V8 is an excellent performer, we doubt it'll be the ultimate pick of the range. Soon after launch there will be a choice of more affordable six-cylinder petrol and diesel units; then the car will become an even more attractive package.

If you bought a new 6-Series, then chances are you'd want people to see you in it. After all, the latest 6 is the best interpretation yet of BMW styling boss Chris Bangle's design language; universally praised, it looks bold and unconventional while retaining the elegance all good grand tourers portray.

The problem so far is that, as striking as the Coup� is, the car's deep flanks and angular window lines mean those wanting to pose can be seen doing so only by those interested enough to look. But here is the model that will change all that - the new 645Ci Convertible.

With an electric folding roof that drops under the bootlid in less than 10 seconds, the soft-top is the perfect tool for drivers who like to be noticed. It's a guaranteed head-turner, and with the roof down we think it looks even better than its tin-top sister. The jury is still out on the rear styling, however, and the controversial bootlid appears even more prominent with the top folded.

Power comes from the same 4.4-litre V8 as the Coup� - and what an engine it is! With 333bhp available, it propels the car from 0-60mph in a mere 5.6 seconds, while the top speed is limited to 155mph. But the V8 isn't all about performance. At cruising speeds, it wafts along almost silently. Floor the throttle and it emits a low growl, as if grumpy that you've disturbed it from its slumber.

The motor's audio effects are better appreciated in the soft-top than in the Coup�. With the roof folded down, you can hear the exhaust rumbling and the engine sucking in air enthusiastically. Not many four-seater convertibles are pure drivers' cars, but the 645Ci is one of an elite breed. Its appeal lies just as much in its dynamics as in its performance. Despite losing the rigidity of a steel roof, the Convertible doesn't suffer from scuttle shake, while it feels nearly as taut and responsive as the Coup� when you press on. The German company's acclaimed Dynamic Drive active suspension set-up is included on all cars, while Active Steering is offered on the options list. However, we favour the model's standard power-assisted rack.

Inside, the Convertible loses some space to its Coup� sister. Rear legroom is tighter, while the roof's tonneau cover means the back bench is also slightly narrower than in the tin-top. That said, accommodation is fairly good compared to that of other four-seat cabrios, and while adults may feel rather cramped, the seats will be fine for the children.

With the roof down, the sleek rear window can be left in place to operate as a wind deflector - and it works well, diverting the airflow away from passengers' necks. Up front, the cabin is identical to the Coup�'s. The belts are incorporated into the front seats, allowing the removal of the B-pillars, while the modern-looking dash is neatly laid out and easy to use. There is slightly less boot space than in the Coup�, although neither car can claim outstanding load-lugging abilities. Still, it's perfectly adequate for a couple of suitcases, even with the soft-top retracted.

BMW has yet to announce UK prices for the 6-Series cabrio, but expect to pay about £5,000 more than you would for the equivalent tin-top. That's a lot of money - but if you've got it and you want to flaunt it, then it's the only option. The 645Ci Convertible is set to become one of this summer's hottest properties, and adds even more strength to the impressive 6-Series range.