The BMW 6 Series Convertible is the ultimate cruiser, boasting incredible power, a high level of comfort and wind-in-the-hair freedom 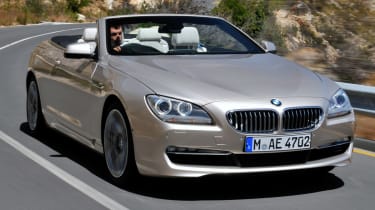 The BMW 6 Series Convertible was made to cruise on the French motorway. It's powered by a choice of three large turbocharged engines, and instant acceleration is readily available. However, with the 3.0 turbocharged diesel engine, the 6 Series can also deliver relatively good fuel consumption and CO2 emission figures. Fans of the 6 Series may be disappointed by the more conservative design than previous models, but other than that it is difficult to find any real faults, thanks to its excellent engineering and impeccable build quality.

The moment you hit the start button and hear the growl of the 650i V8, there's no doubting the potential performance of the 6 Series Convertible. It has an output of 407bhp with 600Nm of pulling power and can sprint from 0-62mph in five seconds, on to an electronically limited to a top speed of 155mph. As for handling, the sheer bulk of the 1,860kg Convertible cancels out any sporty aspirations, but thanks to standard Dynamic Control, users can adjust the steering, throttle and gear settings of the car to suit driving style. An all-new chassis has improved the rigidity of the Convertible and effective suspension makes the car stick to bumpy road surfaces, although it is best suited to cruising at motorway speed.

While the 650i displays the most eye-catching performance figures, the other variants aren't exactly slow. The efficient 640d SE records a 0-60mph sprint of 5.5 seconds, while boasting fuel consumption figures over the 50mpg mark and CO2 emissions of 128g/km. However, this type of performance comes at a price: the 6 Series costs nearly twice as much as a BMW 3 Series Convertible. Compared to the Mercedes SL though, the 6 Series appears more reasonable. It also comes with an impressive level standard of equipment helping buyers swallow the pill.

The restrained lines of the BMW 6 Series Convertible are supposed to impart a feeling of speed, which is why it does not feature any of the more visible design quirks of previous generations. The trademark BMW kidney grilles are lower and wider, while the vertical grille slats break backwards two thirds of the way up in the grille opening. The fabric top has been shaped by the buttress supports on either side of the roof to follow the shape of the car, enabling it to replicate the silhouette of the 6 Series Coupe. LED lights give further character to the Convertible, with circular daytime running lights up front, and neat bars in the rear light clusters.

The BMW 6 Series Convertible has a soft fabric top, and it's efficient at cutting out driving noise thanks to clever fabric layering. The 6 Series offers one large advantage over the rival Mercedes SL, which is two seats in the rear. It is longer and larger than previous model to improve back seat legroom, although it remains on the small side.

When it comes to reliability and safety, BMW has a strong reputation. Although the 6 Series Convertible has not been tested by Euro NCAP, it features an impressive range of security features. As standard it comes with an active bonnet safety system for pedestrian protection. If the car collides with a pedestrian between 12mph and 34mph, the bonnet pops up to absorbing more of the impact, thus reducing the risk of serious injury to the pedestrian. Front and side airbags are also present throughout the range, and a roll over protection system deploys itself in case the car overturns. 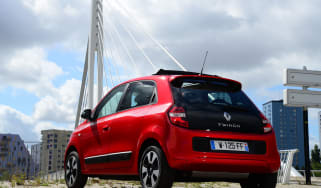 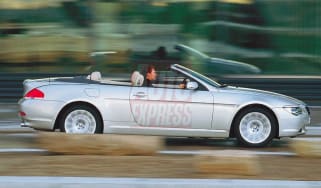 If you bought a new 6-Series, then chances are you'd want people to see you in it. After all, the latest 6 is the best interpretation yet of BMW styli…
Skip to HeaderSkip to Content