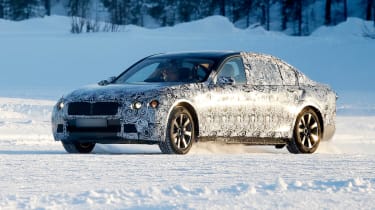 These are the very first pictures of the all new BMW 7 Series saloon. The all-new model isn't due to be launched until 2015, but these pictures show aheavily disguised prototype winter testing in Sweden.

Designed to rival the all-new Mercedes S-Class that is set for release later this year, the flagship saloon was undergoing testing to sign-off the electronic stability systems and heating and ventilation systems.

Even though this pre-production test mule was disguised from the B-pillar backwards the shape in profile is very similar to the current model - but extra protective cladding on rear wheel arches and across the front bumper suggest that a sleeker design is hidden underneath.

At the back a smaller rear screen and narrower boot both suggest a more tapered styling direction than the outgoing model and if you look closely a set of twin exhuasts can also clearly be seen suggesting that this car could be a more powerful straight-six or V8-powered version.

The new 7 Series should be signifcantly lighter than the car it replaces and there are also rumours that a plug-in hybrid version is under development alongside a revised range of efficient turbocharged petrols and diesels, which should help it take on rivals from Toyota and Audi.

Like the Mercedes the 7 Series will be a technological showcase so expect a range of advanced features including some form of autonomous driving, a more advanced version of the current iDrive infotainment system but more details are likely to emerge closer to its official launch at the 2015 Frankfurt Motor Show. 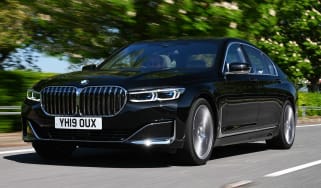