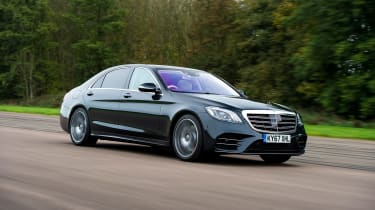 There are few experiences more relaxing than driving an S-Class; in fact, just about the only thing that can top it is if you're in the back seat, being chauffeured. Merc's biggest saloon was crowned our 2016 Luxury Car of the Year, and vibrations through the pedals and steering wheel are non-existent: even at motorway speeds you won’t hear any wind or tyre roar.

All the engines are fantastic, but it’s amazing that Mercedes can offer a six-cylinder diesel-engined model that returns more than 50mpg. For the ultimate in speed, there are high performance S 63 V8 or S 65 V12 Mercedes-AMG versions. Stepping down a peg, there’s the S 500 straight-six which is still no slouch, hitting 0-62mph in under five seconds and averaging more than 40mpg.

• Mercedes S-Class vs Audi A8 vs Lexus LS

In short, the Mercedes S-Class has set the standard for luxury and cutting-edge technology for over 40 years - and this sixth-generation car is the best yet. Other revisions for the 2017 model year include some minor styling updates and some major technical changes, including a new straight-six diesel engine and a new mild-hybrid powertrain.

Not only is the S-Class easily the best car in its class, it also shows up much more expensive models with its sublime ride, expansive tech package and luxurious interior.

The Mercedes Benz S-Class is the most luxurious model to wear the famed three-pointed star, and as you would expect it’s a technical and technological tour-de-force.

The ultimate Mercedes saloon takes on a small but very desirable band of rivals in the luxury sector, including relatively mainstream models such as the Audi A8, BMW 7 Series and Jaguar XJ, and more rarified competitors like the Aston Martin Rapide, Bentley Flying Spur, Maserati Quattroporte, Porsche Panamera and even the Rolls-Royce Ghost. That’s before you factor in a variety of high-end luxury SUVs, including the Range Rover, Audi Q7 and the Bentley Bentayga. There’s a standard S-Class saloon, but most of the models have an extended wheelbase that caters for those who don’t drive themselves. In complete contrast, the high-performance Mercedes-AMG S 63 and 65 models, as well as the coupe and cabriolet versions, add a dash of extra excitement for those who do. 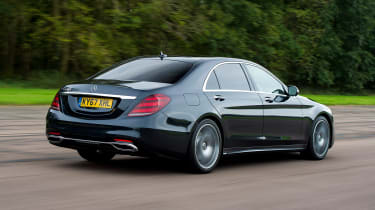 While today's S-Class lacks some of the bespoke feel of previous generations – until the mid-1990s, the Mercedes flagship’s development was famously free of budget restrictions – it remains a remarkable machine. The model also maintains the tradition of introducing exciting new technologies to the Mercedes line-up, and often to the automotive world.

In the case of the current S-Class, it was Magic Body Control that garnered the headlines at launch. Standard on the S 65, it’s a system that uses cameras to scan the road in front for imperfections, then pre-adjusts the suspension to meet the oncoming challenge. Other highlights include an advanced high-definition TFT instrument pack, and the Driving Assistance tech that keeps the car in its lane and a safe distance from other traffic when the cruise control is switched on.

Aside from the technical advances, the S-Class has always been the car that shows the way forward for Mercedes' design, which means sleekly powerful lines and a superbly finished cabin.

Under the bonnet, the 'regular' S-Class is available with a choice of two 3.0-litre six-cylinder engines: a diesel unit in the S 350d or a considerably more powerful petrol engine in the S 500. Then, at the top of the range are the Mercedes-AMG S 63 and S 65 models, with monstrously powerful 4.0-litre V8 and 6.0-litre V12 engines, respectively.

For those looking for better fuel economy, Mercedes will also sell you a mild-hybrid S-Class, called the S 560 e. It combines a 3.0-litre petrol V6 with an electric motor, producing claimed economy figures of 113mpg and a combined power output of 469bhp.

Trim levels are even simpler, with both the S 350d and S 500 coming in AMG Line trim and the two AMG models having their own unique specifications. If you want to go beyond AMG Line trim, not only are there loads of options, you can also add either the Premium or Premium Plus packages. The former adds a 360-degree camera with remote parking assistant, heated/cooled front seats, a panoramic glass sunroof and nappa leather upholstery; and, on top of that, the latter adds an uprated stereo, massaging front seats and both the Energising Comfort and Air-Balance packages.

For an alternative review of the latest Mercedes S-Class Saloon visit our sister site carbuyer.co.uk