Full details, images and video of the new 2016 BMW 7 Series. It's bigger and higher tech than ever before

But there was drama at the unveil of the car at the show when the press conference ended abruptly as BMW boss Harald Krueger appeared to faint under the lights.

However we already knew that BMW's hybrid tech would join the 7 Series range, with a new 740e model with a claimed economy figure of 134mpg on the way. 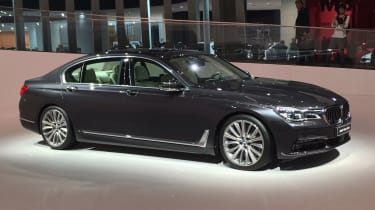 The classier new BMW 7 Series is aiming to finally give the knockout punch to the all-conquering Mercedes S-Class when it reaches showrooms in November 2015 priced from £63,750.

It’s clearly an evolutionary design for the new Seven rather than a radical rethink. The front-end retains the traditional swollen kidney grille and prominent nose, but the biggest change is a set of more aggressive headlamps featuring the new ‘Laserlight’ laser-based beam tech as the BMW i8 supercar. 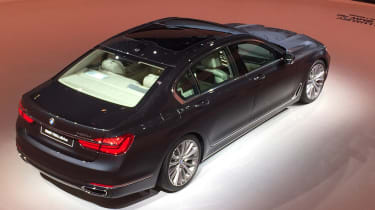 The side profile is almost completely identical to the old model's, while the rear is positively blink-and-you’ll-miss-it until you note the sharper read LED light design. It’s clear BMW would rather play it safe than risk scaring away loyal customers as ex-designer Chris Bangle’s quirky 7 Series of 2001 did.

BMW 7 Series: bigger than ever

Like the outgoing car, the 7 Series is offered in both regular and long-wheelbase format. The LWB model is a full 14cm longer than before, while even the base car swells by 26mm to improve passenger space. Width and height are virtually identical, but it’s still the largest series-produced model the Munich firm has ever produced. The long wheelbase rear cabin is visibly larger than before, while there’s a 515-litre boot. 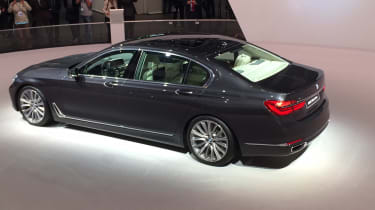 Despite the size increases, the biggest news is that it is nowa substantial 130kg lighter than the old car. This is thanks to the use of carbon-fibre reinforced plastic (CFRP) for the passenger cell and body, as well as lighter new engines.

Climb inside and the only big design change to the dash is a new freestanding sat-nav/infotainment screen in both the smaller standard item and 10.2-inch Professional option. ConnectedDrive services include innovative new “interactive traffic sign updating”, a world first. It’s also a touchscreen for the first time, combining with the iDrive rotary controller, and a new gesture control system that debuts on the flagship. 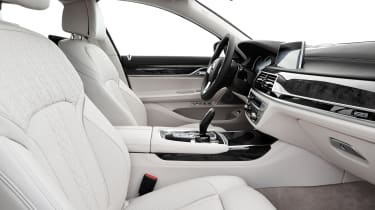 Gesture control allows you to make hand movements to alter in-car functions, with a 3D sensor registering your movements. The instrument cluster is a multifunctional TFT system, adjusting according to which driving mode you are in. Four-zone climate control is standard across the range, with a touch control panel between the rear seats allowing adjustment of temperature and the rear media interface. An optional Heat Comfort system allows the wheel, front and rear armrests and front and rear seats to be warmed individually, while new ambient lighting adorns the cabin.

Other tech includes wireless phone charging, active massaging seats, WiFi browsing and a removeable 7-inch tablet that can control functions from in our outside the car.  There’s even the option of an ‘Ambient Air’ package, which releases a choice of eight controlled scents into the cabin and ionises the air. 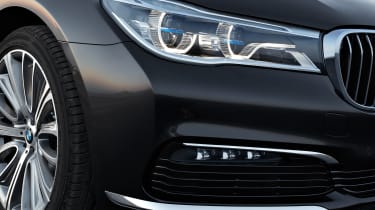 The neatest feature is another world first. A new ‘Parking Assistant’ feature allows the car to manouver in out out of forward parking or garage spaces without the driver even stepping inside. It can be activated remotely with the new ‘Display Key’. Safety tech such as rear collision prevention, rear cross-traffic alert and autonomous traffic jam steering. 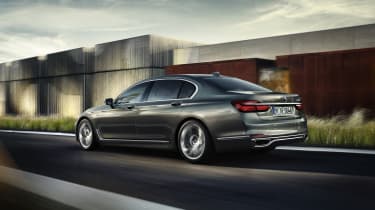 The only engine options at launch for the 7 Series are six-cylinder units, with a 326bhp 3.0-litre twin-turbo petrol in the 740LI and the 265hp 730D with 620Nm of torque.  Four wheel drive is also available across the range.

Check out our round-up of the best luxury cars you can buy now... 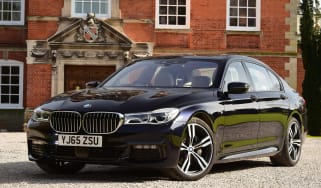