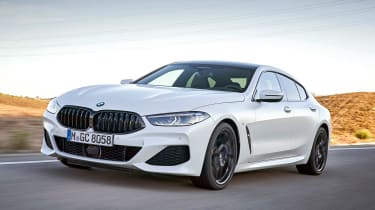 BMW claims that the 8 Series Gran Coupé is the world’s only true four-door sports car, and on the road it does feel sharper than its raw credentials suggest. BMW has made a committed effort to make this the practical 8 Series, while keeping the style and dynamics of the rakish two-door intact. It’s a talented, if somewhat expensive, piece of kit.

BMW reckons that the 8 Series Gran Coupe is a unique concept – in that it’s the only four-door sports car on sale that’s derived directly from a two-door model.

That sounds like a long-winded way to describe what is, in effect, an 8 Series with four doors, but it’s the most accurate way to look at it. This is a four-door, four-seat sports car that also has a decent 440-litre boot and space for four inside.

So what’s the difference between this car and a Mercedes CLS or Audi A7? And why such a specific definition? Well, the Gran Coupe is based almost entirely on the regular two-door 8 Series beneath the skin, despite the fact that its wheelbase has been stretched by 201mm to make room for the longer roofline and larger rear cabin. 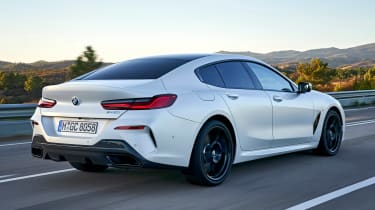 Yet despite that new body and extra doors, as far as BMW is concerned, this is still resolutely a sports car, one that has ‘a sports car feel to it in all four seats’. But is this anything more than marketing fluff?

Before we take the wheel, we must take a seat in the back. It’s not only getting in and out that’s easier in the 8 Series Gran Coupe; once you’re ensconced in the back, there’s also a lot more head, leg and elbow room than you’ll find in the two-door. Not quite to the point where the Gran Coupe feels genuinely luxuriant, but enough to make long journeys much more pleasurable.

The 840i we’re driving here is likely to be the biggest seller. It’s powered by BMW’s familiar 3.0-litre straight-six turbo petrol engine, with 335bhp and 500Nm of torque. On the scales, this version is the lightest of the new Gran Coupes, yet it still weighs a hefty 1,875kg. It has a little less power than its nearest competitor, the £12k cheaper Mercedes CLS 450, but the 840i still gets enough poke for 0-62mph in 4.9 seconds and an electronically limited 155mph. 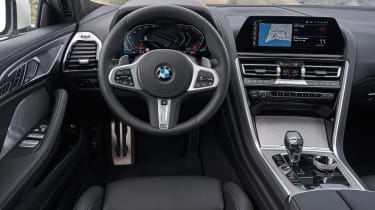 There are three other members of the Gran Coupe family – all with four-wheel drive. There’s the same 840i but with xDrive, a similarly-equipped 840d, and the range-topping top-spec 850i, which costs a whopping £97,720. That model is powered by a mildly detuned version of the new M8’s 4.4-litre twin-turbo V8, producing 523bhp.

As you’d expect, the Gran Coupe is an absolute tech fest inside and out. The cabin materials are top notch, although ‘extended’ leather remains an option. The standard spec is impressive, nonetheless, including four-zone climate control, adaptive LED headlights, heated seats front and rear, BMW’s Live Cockpit Professional display, a Harman Kardon stereo and fully interactive nav with iDrive control and a touchscreen.

Options include soft-closing doors, a Bowers & Wilkins stereo upgrade, various carbon-fibre aesthetic and aerodynamic upgrades, plus a Heat Comfort Package that warms the steering wheel and armrests. So although it’s expensive, the standard tally is strong when compared to the competition.

Were we to list all the safety, comfort and driver-assistance features it contains, there would be no more space to tell you what it’s like to drive. Take it as read that, if the tech exists within BMW’s vast repertoire, the Gran Coupe has it. 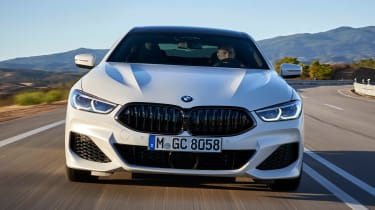 On the move, the GC feels extremely composed for such a big, rear-wheel-drive car. It’s far more agile than you might expect, with precise steering, fine grip and decent body control. And yet it remains compliant and comfortable in the car’s standard drive mode. Select Sport, and everything tightens up, at which point the 8 Series Gran Coupe feels much more like the sports car BMW says it should be. It even emits a much fruitier exhaust note, as well as having sharper, crisper and more responsive steering.

It’s surprisingly rapid, too, with strong torque available from the straight-six engine – from as little as 2,000rpm and all the way to the red line. For whatever reason, this engine feels more potent in the Gran Coupe than it does in an equivalent 5 Series, a result of the software having been re-written to suit the car, says BMW. The same goes for the eight-speed gearbox, which is sweeter here than it is elsewhere in BMW’s range.

All in all, the Gran Coupe – even in its most affordable, rear-wheel-drive 840i guise – feels like a serious effort by BMW to produce a driving experience that is genuinely different from anything else out there at the moment. It also looks cracking in the flesh and is exhaustively well specified as standard. We like it, even though it is rather expensive.