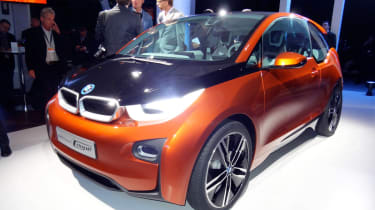 BMW is forging ahead with bold plans for its ‘i’ brand by adding a sporty fourth model to the line-up. The i3 Concept Coupe made its debut at a special preview event, high in the Hollywood hills, on the eve of the LA Motor Show.

The battery-powered hatch is the fourth concept model to emerge in the project ‘i’ family, which already includes the five-door i3, i8 and i8 Spider.

This new version of the i3 reveals a near-production-ready interior, a radical new look on the outside and points towards a three-door i3 that could arrive in 2014 – after the five-door version debuts in late 2013.

“This new concept proves there is potential for other derivatives,” Benoit Jacob, head of design for BMW i told us. “The focus right now is to get the one i3 and one i8 model finished and on sale, but as you can imagine there is definitely room below and between those two cars. In terms of the materials used this is extremely close to the production car.”

The i3 Coupe is lower and wider than the five-door, but with the same 2,570mm wheelbase, and a dramatic profile. It shows off the floating roof design, with no B-pillar, a longer door and stepped shoulder line. This broadens the rear glass area, a key feature according to Jacob: “We wanted to make visibility for rear passengers outstanding, something that’s always criticised in city cars.”

The overall design theme is familiar, though, using a series of overlapping layers inside and out to emphasise BMW’s unique LifeDrive construction technique.

To minimise weight and boost efficiency, the passenger cell of all ‘i’ cars is made of carbon fibre-reinforced plastic, while the Drive module (comprising the electric powertrain, batteries and chassis) is almost entirely aluminium.

The mechanicals are identical to the five-door i3’s, combining a 168bhp electric motor driving the rear wheels via a single-speed gearbox with a lithium-ion battery pack under the floor. A range-extending petrol engine will be offered as an option, but won’t have an impact on the way the i3 looks or on the interior packaging.

BMW claims a range of up to 100 miles per charge, and there are three driving modes: Comfort lets the motor deliver its full potential, while Eco and Eco Pro modify the throttle sensitivity and air-con intensity to eke out a few extra miles.

As there’s no transmission tunnel, the cabin offers plenty of space, with two individual seats in the rear. Up front, the centre console is dominated by a familiar iDrive dial, while a 6.5-inch screen replaces the traditional instrument cluster and an 8.8-inch display – used for the sat-nav and infotainment controls – sticks out from the dash.

“This car is really a message that says things should be kept as simple as possible for electric cars,” Jacob added. “Traditionally premium means adding more leather and more metal, but this proves it’s not necessary.”

Small cars come in all kinds of shapes, if not sizes. Here we highlight the best new small cars on sale
BMW i3 review