BMW is going after the Range Rover and Mercedes GLS with its new X7 SUV, revealed here in full ahead of its launch in Britain next March.

It’s the largest SUV BMW has ever built and is a real sign of where the new car market has been moving in recent times. The brand has been in the SUV business for less than 20 years, but it already produces seven separate models, and this type of car accounts for more than a third of all BMWs leaving showrooms.

Nina McFadden, product manager for the X7, explained the significance of the new model. “Since a seven is in the name, it has to live up to the heritage of the 7 Series and have the same luxury feeling. This was our big target,” she said. 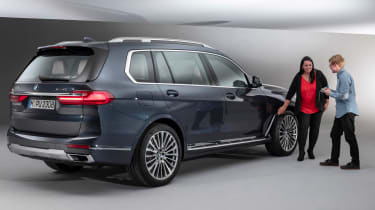 At 5,151mm long and 2,218mm wide, the X7 is larger than a Range Rover, but it’s slightly lower, at 1,805mm tall. It’s the heaviest production car BMW has made, weighing in at over 2.4 tonnes in its lightest guise. Wheel options range up to 22 inches. Standard LED head and tail-lights, plus a glass panoramic roof, round off the imposing figure.

Two diesels and a petrol engine will be offered in the UK from launch, all of them sending power to an eight-speed automatic gearbox. The xDrive30d has a 3.0-litre straight-six turbodiesel producing 262bhp, and this will be the base model when the car goes on sale next year, priced from £72,155.

The xDrive40i is a turbocharged six-cylinder petrol option with 335bhp. At the top of the X7 line-up is an M50d model developed with help from BMW’s M-division. It sticks with six cylinders, and produces 395bhp. A V8 xDrive50i with 456bhp on tap is also being offered, but not in Europe.

At present, BMW has no plans to introduce a plug-in hybrid X7, but product manager McFadden told us that the CLAR platform it uses (which is adapted from the X5) can accommodate plug-in powertrains, so a PHEV variant is possible if demand is there for it.

All cars are equipped with an xDrive all-wheel-drive system, which BMW says retains a rear-drive-biased set-up. For those intending to take their X7s a bit further off the beaten track, an off-road package with driving modes tailored for snow, sand, gravel and rocky surfacesis available on the options list.

• The top ten SUVs and 4x4s on sale today

The X7 is a seven-seat SUV, with a full-size third row capable of seating two adults. As standard it features a middle bench that seats three people, straddled across a flat transmission tunnel. But in a move unique for the class, buyers can opt for a six-seat set-up instead; it features two large seats complete with armrests in the middle row. 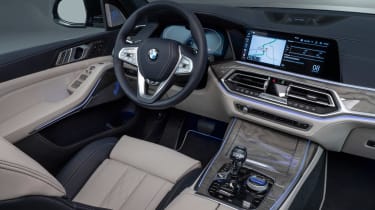 Keep all seven seats in place and the boot’s capacity is 326 litres – just a little more than you’d get in an average family supermini. Fold the third row flat and 725 litres are on offer, while folding all five rear seats down opens up a maximum of 2,120 litres of load space.

Up front, the basic layout of the dash is similar to those of other recent BMWs, such as the new X5 SUV and the reborn 8 Series coupé. But the X7 stands out thanks to its selection of metal and wood trims, ambient lighting strips and crystalline gear selector. BMW’s iDrive 7.0 in-car control and infotainment tech features across dual 12.3-inch displays. 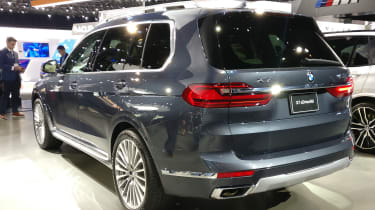 The X7 has been revealed at the LA Motor Show in California. Fitting, as it was designed with the North American market in mind and is built at BMW’s factory in South Carolina. The bold design and immense grille will fit in well among the American SUVs.

Read our first drive of the Rolls-Royce Cullinan, which shares technology with the X7, here... 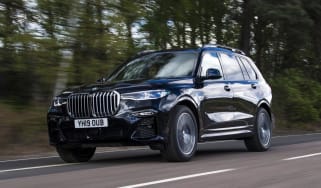