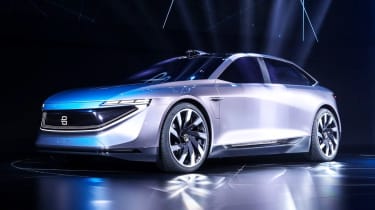 The Byton K-Byte Concept is due to be shown on US soil for the first time. The autonomous saloon will make its debut on a the Concours d’Elegance at Pebble Beach in Monterey, California.

Though start-up brand Byton originated in China, it employs 450 engineers and programmers at a base in Santa Clara - just an hour or so down the road from Pebble Beach.

The K-Byte Concept showcases the brand’s vision of a saloon set to hit production in three years’ time - a model which will feature Level 4 autonomy and broadband connectivity. 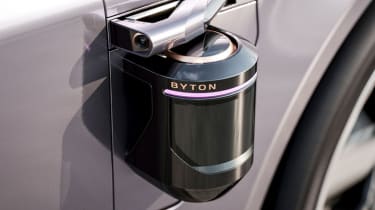 The K-Byte showcases a theme which Byton refers to as “New Semantics”. Not to be confused by a car inspired by heavy eyeliner and flamboyant frilly jackets, Byton says that in essence this means that the K-Byte proudly shows off the sensors, cameras and retractable front and rear lidars which scan the vehicle’s surroundings during autonomous driving.

The K-Byte is the second concept Byton has revealed in 2018, having unveiled the Byton Concept SUV at the Consumer Electronics Show (CES) in January. That SUV - which shares a platform with the K-Byte - has now been renamed the M-Byte Concept to align with Byton’s naming structure.

A production version of the K-Byte Concept is set to hit showrooms in 2021, with Byton planning to launch up to 30 stores across China over the next 18 months before expanding into Europe and North America.

We’ll see the M-Byte SUV first, with a release date pencilled in for the latter half of 2019. Power comes from a choice of a 71kwh battery producing 268bhp and 248.5 miles of range, or a 95kwh alternative delivering 469bhp and 323 miles of range. At this stage, it seems likely that the K-Byte Concept will offer the same options when production starts.