Cadillac ATS Coupe offers a great interior and punchy performance, but it's left-hand drive only 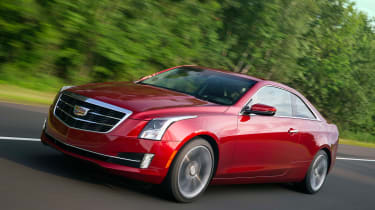 The Cadillac ATS Coupe is a BMW 4 Series-rivalling car that will be a bit of a rare sight on UK roads. That’s nothing to do with its abilities – in fact, it’s actually pretty good – but because Cadillac only has one dealership in the UK, the cars won’t be right-hand-drive and there’s no diesel choice.

Instead, buyers have to go for a 2.0-litre turbo mated up to a six-speed auto and it’s a good combination, albeit not as good as that found in the BMW 428i. It’s definitely a car for those that want something completely different, and its bold design will help it stand out even further.

We’re seriously impressed by the interior, too; open pore wood, high-quality leather, brushed chrome and lashings of Alcantara can be found on high-spec models.

The 2.0-litre turbo provides as much performance as you could reasonably want, able to hit 62mph from a standstill in 6.2 seconds. It’s quiet and punchy at low speeds but we thought the gearbox could do with being a little quicker to react, and there’s a bit of roughness to the engine sound at high revs.

With adaptive dampers fitted – only available on rear-wheel drive, not four-wheel drive – the ATS Coupe rides quite well. Set those adaptive dampers to Sport and the ride becomes a little too bumpy. Alternatively, not having them at all also results in the suspension sending too many jolts to the cabin for it to be relaxing. 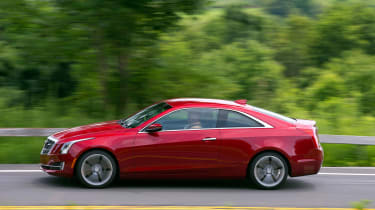 The handling is best described as solid. There’s plenty of grip, very predictable steering and not much body roll so the ATS feels really sure-footed. A BMW 428i just feels that little bit more involving but it’s by no means a bad effort by Cadillac in this respect. It’s even pretty quiet and refined on the motorway, too.

The 2.0-litre turbo engine only claims official fuel economy of 34mpg, so it’s no match for the 50mpg-plus diesels that BMW offers in its 4 Series. The high CO2 emissions will make it relatively pricey to tax, too.  Be prepared to take a hit on depreciation as well; there’s not likely to be much demand for a left-hand-drive coupe in the used market.

Despite looking a lot like the ATS saloon, the Coupe only actually shares its bonnet with that car – every other panel is new. The huge grille, sharp creases and upwards-flowing LEDs are a bit more outlandish than what you’ll find from any of the German manufacturers but it’s still quite a pleasing design. All Coupes come with 18-inch wheels as standard and there’s plenty of expensive-looking chrome and contrast trim.

The interior is arguably the highlight of the whole package, though. Our car was a top-spec Premium Connection model, complete with matt dark wood inserts in the doors, gloss black trim on the centre console and steering wheel, brushed aluminium highlights and high quality leather. Add in the contrast stitching and Alcantara and this genuinely feels like one of the best cabins in this class.

As the more stylish, less practical member of the ATS family buyers shouldn’t necessarily expect too much in this particular area. The back seats are pretty good for legroom but tall passengers will find themselves a bit short on headroom. And if the two-door arrangement didn’t make things tricky enough already, the seatbelts stretch out across the opening meaning you have to clamber over them to get to the back. 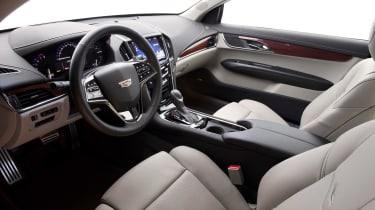 There are enough storage spaces throughout the cabin to store a couple of small bottles of water and some keys and sunglasses. Storage for your phone will most likely be hidden behind the centre console, which also includes a wireless charging pad. Most phones still don’t have integrated support for this feature, though.

Considering just how rare Cadillacs are on UK roads and how they don’t feature in our Driver Power survey, it’s quite difficult to assess the ATS Coupe’s reliability. All we can say is that the interior feels solidly built and many of the mechanical components are used across a wide range of Cadillac models.

The centre console lifts up at the touch of a button to reveal a hidden cubby behind it that features a wireless charging pad. We struggled to get it to lift up and move back down again, though, but it’s hard to say whether that’s a precursor to anything going wrong.

We don’t have any Euro NCAP crash test results for the ATS or ATS Coupe but it does have clever features like autobraking, lane-keep assist and plenty of airbags. 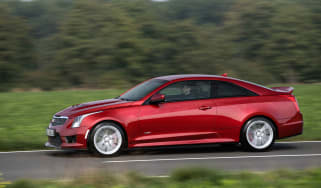