New Cadillac CTS is a great cruiser, but can't quite keep up with its German rivals 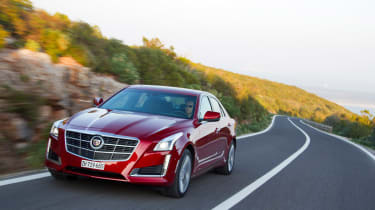 The Cadillac CTS is the American manufacturer’s answer to the BMW 5 Series and Audi A6. Even though the brand has been around for 112 years now, it has never been a success story in Europe. Now in its third-generation the CTS is longer, lighter, lower and an overall more polished product than its predecessor.

Not only has the latest model changed visually, but comprehensive mechanical changes have also taken place. In Europe and in the UK, the CTS will be offered with a new 272bhp 2.0-litre turbo petrol engine. To really challenge the competitive executive saloon market, an efficient diesel engine is needed in the range. Currently, Cadillac offers no such motor - and the car is currently only available in left-hand drive. However, the manufacturer is in the process of introducing more efficient units for European markets .

A part-aluminum construction helps shed 128kg of weight over the previous model and a 40 per cent stiffer body ensures composure and body control on the road. All four trim levels are generously equipped although a starting price of £43,146 is a lot higher than its European rivals. Buyers also have the choice between rear-wheel and all-wheel drive versions, too.

In Europe, Cadillac will only offer buyers the new 272bhp 2.0-litre four-cylinder turbo petrol engine, which is mated with a six-speed automatic gearbox. It may have more power and torque than its European counterparts but it never feels particularly quick. The all-wheel drive model sprints from 0-62mph in 6.9 seconds, while the rear-drive version gets there three tenths of a second quicker, at 6.6 seconds.

The extra grip offered by the all-wheel drive system is obvious. The car feels more planted and surefooted in the bends and extra traction is clear in damp conditions. While steering is precise and accurate on both models, the standard version provides a little more feel.

Keep the CTS in auto and it’s a very refined and relaxed cruiser but flick it into manual, using the steering wheel-mounted paddles and changes becomes laboured. Even in sport mode the CTS does a more precise job of shifting up and down the gears itself rather than controlling the gearbox manually.

What impresses most about the CTS is the ride quality, as magnetic ride control is standard across the entire UK range. The system reads the road surface adjusting the dampers every 200 milliseconds delivering a smooth ride even over rougher ground.

The CTS is lighter than many of its rivals and the is replaces thanks to a part aluminium structure. Combined with a lower and new aerodynamic design, economy should be impressive.

Sadly, only being offered with a 2.0-litre petrol engine means a rather mediocre 32mpg for the standard model and 31mpg for the all-wheel drive version. That’s some way behind the 46.3mpg of the equivalent BMW 528i.

CO2 emissions are also substantially higher than its rivals, emitting 198g/km and 212g/km for the RWD and AWD models respectively. In comparison, the BMW emits just 142g/km and can be up to £10,000 cheaper spec or spec.

The new CTS is 125 mm longer than its predecessor as well as being 19mm lower and with a 30mm longer wheelbase. It’s a far more sophisticated and elegant design, with the chiseled bonnet, larger grille and a sharply raked windshield giving a leaner stance. In Europe, the new CTS will be offered with 18-inch wheels as standard but measuring in at almost five-meters long, the wheels are dwarfed a little.

In profile, there’s a very prominent crease running from the headlamps right across the flanks to the tail lamps, which emphasizes the vehicle’s stretched appearance.

The handsome front end is dominated by the raked back LED headlights and daytime running lights. Both RWD and AWD versions are finished with molded chrome-finished exhaust pipes, with the all-wheel drive model only denoted by the slightly narrower rear track and badge on the boot.

Being 125mm longer than the previous model and having an increased wheelbase of 30mm, immediately boosts practicality. There’s only a little less room in the back than you’d find in the BMW 5 Series and the boot is deep, measuring in at 447 litres.

There are various cubbyholes for all you lose odds and ends but none are particularly large. The electronic glovebox may novel but it’s an awkward shape and you’d struggle to fit anything other than a small bottle in there.

Being part of GM, there should be little concern when it comes to vehicle reliability and the 2.0-litre engine is a newly developed unit.

The CTS hasn’t yet been tested by Euro NCAP but 10 airbags fitted as standard and automatic seat belt tightening should ensure it performs well.

A driver awareness safety package is also offered, fitted as standard from Luxury trim upwards. It features various features including lane departure, collision alert and automatic collision preparation which uses vibrating pulses in the driver’s seat to alert the driver. 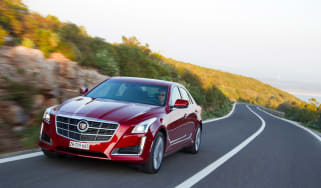 Cadillac CTS 2014 rivals the BMW 5 Series, but can it match the German saloons for desirability?
Cadillac CTS (2008-2014) review

Cadillac’s characterful CTS is ready to take on the BMW 5-Series and Jaguar XF.
Cadillac CTS 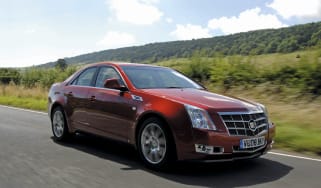 American giant is back with all-new version of luxury saloon. we see if it can challenge the best in class...
Cadillac CTS 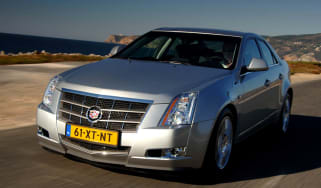 Cadillac's new CTS is facing stiff competition from its European rivals. So is it up to the challenge?
Cadillac CTS Saloon review 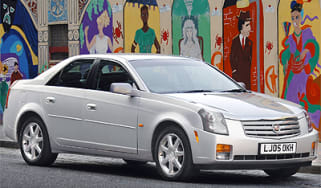 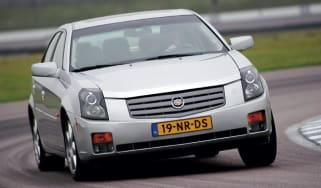 When you think of Cadillac, does your mind wander to huge, pink convertibles with gigantic fins? If so, you'd better think again. The American brand i…
Skip to HeaderSkip to Content