Cadillac's new CTS is facing stiff competition from its European rivals. So is it up to the challenge? 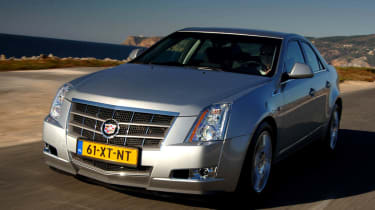 The CTS really has to stand out if it’s to succeed in an extremely competitive sector packed with talented cars. On the face of it, the newcomer makes a good impression. It looks sharp, is packed with kit and is a spacious and refined cruiser. But it’s let down by low-quality cabin materials and a firm ride. The biggest hurdle for potential Cadillac buyers, though, is the lack of a diesel engine in the line-up

Think Cadillac, and one word springs to mind – big! The cars, the country they are built in and the characters who drive them are all larger than life. However, since the brand entered the UK market in 2005, its sales figures have been tiny, and languished firmly at the other end of the size scale.

In an attempt to reverse the trend, a raft of new models is being launched. We’ve already been impressed by the new entry-level BLS, based on the Saab 9-3.

Now it’s the turn of the CTS. Set to go head-to-head with prestige competitors such as the BMW 5-Series, it’s certainly got a fight on its hands. So, is the new Cadillac up to the trans­atlantic challenge?

Based on looks alone, the CTS should be a winner. Sharp lines and plenty of road presence turn heads. At the front is a prominent grille and distinctive vertical headlights, while the flanks have a gently rising waistline.

At the back there’s a pair of eye-catching clear lamps and large LED strips for the brake lights and foglamps. Chrome details such as the front wing vents and alloy wheels remind you of the Cadillac’s American roots.

The interior is equally striking, and extremely spacious, too. Get behind the wheel, and you’re confronted by a logical dashboard layout which fea­tures cowled dials, leather trim and a retractable colour screen for the sat-nav. Unfortunately, this impressive display can’t compensate for the below-par finish. The quality of the shiny plastics falls well behind that of rivals from Germany and Japan.

Out on the road, the CTS is more convincing. The 3.6-litre V6 is powerful, smooth and willing to rev, which is vital when you consider that the peak torque figure of 374Nm doesn’t arrive until 5,200rpm. Only the slow-witted six-speed automatic gearbox really hampers your progress.

Turn into a corner and you won’t experience the roll and pitch normally associated with US-built cars. Thanks to its sports suspension, grip is good, and although the steering lacks feel, it’s direct. One downside of the stiff springs is that bumps and potholes easily upset the Caddy’s composure. However, for those wanting more comfort, there is the option of a softer chassis set-up.

In the near future, buyers will also be able to specify a four-wheel-drive transmission or a more economical 208bhp 2.8-litre V6 petrol unit. Sadly, though, Cadillac’s new 250bhp diesel won’t arrive until well into 2009.

Rival: BMW 530i There are virtually no chinks in the 5-Series’ armour. Its 3.0-litre engine is smooth and powerful, build quality is superb and the chassis is the most composed in the class. Where the BMW can’t compete with the CTS is on price.