American giant is back with all-new version of luxury saloon. we see if it can challenge the best in class... 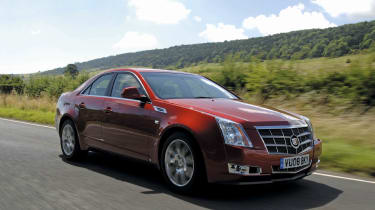 The CTS has the style and the features to make buyers in this class sit up and take notice. It’s well equipped and competitively priced, and will be exclusive, too. But it falls short on the road. The auto box suffocates the engine, while the ride is hard and the handling not dynamic enough. Add the fact the diesel isn’t available from launch, and it fails to convince.

Will it be third time lucky for Cadillac? The US brand has twice tried to cross the pond, and had disappointing sales results on both occasions. This time, Cadillac claims it has learned its lesson. Bosses say the latest UK-bound model, the CTS saloon, is bursting with features which are guaranteed to lure BMW, Mercedes and Audi drivers on to forecourts when it arrives next month.

It’s fair to say that the new Caddy on the block is a striking design. Where the previous model – which spearheaded the brand’s last foray here – was bland and angular, the new car is truly distinctive. A gaping egg crate grille dominates its nose, while either side are intricate xenon lights. These swivel with the steering to aid visibility at night. In addition, vertical LED tubes operate as daytime running lamps, similar to those on the latest Audis.

Along the flanks, chrome is key – it features on the standard-fit 18-inch alloys. There’s more polished metal and clever lighting at the rear, including another LED stack, this time for the red tail-lights.

Cadillac has decided that keeping things simple will help the CTS succeed. There are two petrol engine choices: either a 208bhp 2.8 V6 or the 307bhp 3.6-litre V6 in our car. Both are mated to a six-speed auto box.

On the inside there’s only one specification, too: Sport Luxury. It includes everything you could possibly wish for, from a touchscreen satellite navigation unit to an exceptional 10-speaker Bose sound system and hand-stitched leather trim.

The interior is the CTS’s real strength, as it finally banishes the scratchy plastics and poor finish that blighted previous Cadillacs. We also like the details; the LED mood lighting creates a cosy ambience when driving at night, and the iPod integration was designed by Apple specifically for the stereo in this car.

But while most buyers will no doubt be impressed by the cabin, it’s on the road where super-saloons from BMW, Audi and Jaguar dominate the market at the moment. And it’s here that the CTS loses ground. For starters, the 3.6-litre engine sounds uninspiring, while it’s hamstrung by the automatic transmission. The gearbox is reluctant to kick down when overtaking, yet at the same time, it changes ratio without warning in town, making for less than smooth progress.

The sports suspension is firm and supple, and body roll is all but eradicated. However, potholes catch the CTS out, sending shudders through the cabin and causing creaks and rattles.

A diesel model with 250bhp and 550Nm of torque will arrive in the middle of next year, at the same time as a two-door coupé and practical estate. And for the whole of 2009, Cadillac aims to sell around 300 CTS saloons. Based on the car’s style and specification, plus its bargain price, we don’t think that’s an unrealistic target.

If parent company General Motors is serious about making Cadillac earn its stripes in the UK, though, the CTS – and any future models – need to be more complete drivers’ cars and not just showroom stars.

Rival: Lexus GS The GS is another alternative to the established German contenders. Through careful marketing, Lexus has achieved the foothold in the market that Cadillac craves. And not only is the car well equipped, it can mix it with the best on the road.