The big Cadillac saloon is better than you may fear. 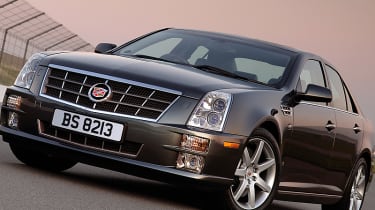 Driving This is a large car, and needs careful placement on the road, something the over-assisted steering doesn’t exactly help. But those fearing an American wallow-barge through the corners may be in for a surprise. OK, it’s not as dynamic as class-leaders such as the BMW 5-Series and Jaguar XF, but extensive retuning for the European market has made the STS into a reasonably accomplished machine. The top-line V8 variant even features hi-tech magnetic dampers, though both it and the cheaper V6 have self-levelling rear suspension, stability control and powerful Brembo brakes. We prefer the direct-injection V6 petrol, which has 315bhp and hits 60mph in a swift 6.9 seconds. The V8 is thirstier, not much more powerful and hardly any faster. Both versions drive through a six-speed automatic transmission.

Marketplace In finally selling the STS as a right-hand-drive model, Cadillac is offering UK buyers an intriguing alternative to an executive model. Not far shy off a Merc S-Class in terms of size, it’s priced more in line with the smaller Jaguar XF. There is no missing it on the road, thanks to bold lines and a distinctive edgy look: the vertical strip of LED tail lights is unmistakable! Rivals, on price, include the BMW 5-Series, Audi A6 and Mercedes E-Class… but, in terms of size, the five-metre-long model is more of a rival to the Audi A8 and BMW 7-Series. There is just the single extremely well-equipped Sport Luxury trim line.

Owning Inside, the STS lacks the drama shown by its exterior. The American maker has upped its game with the latest CTS, but the STS has yet to benefit from these changes, and appears plasticky in comparison. The big Cadillac certainly isn’t short on space, though. It’s not quite S-Class level, but appreciably larger than models like the XF, particularly in the rear. Equipment levels are also superb. The electric leather seats are heated and ventilated – with the rear pews heated, too – while a reversing camera, BOSE stereo and sat nav are all standard. Experts are out on retained values but don’t expect premium maker levels – though the bargain list price does help offset this. The biggest hindrance is the fuel economy of those two petrol engines. The V6, in fairness, isn’t bad for the sector, considering its pace, but that’s still a long way off diesel levels: an oil-burner is, for now, unavailable. The dealer network is also tiny to non-existent. 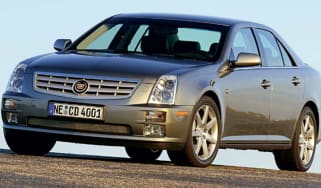 After two failed attempts at grabbing a slice of the UK car market, Cadillac bosses have accepted that there is no future in trumpeting the past when …
Skip to HeaderSkip to Content