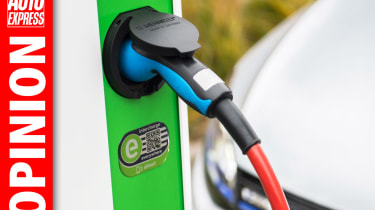 It probably shouldn’t surprise us that there is remarkably little detail in the Government’s proposal for solely electrified vehicle sales from 2040. Politicians always have a tendency to think big, particularly when the time frames involved run into decades. The soundbites and headlines come more easily that way.

They also have notoriously poor understanding of the technologies involved in modern cars; after all, their fixation on CO2 emissions instead of NOx particulates is one of the main reasons we’re facing such a crisis on urban air quality. Legislators, not the car industry, created the rules on Vehicle Excise Duty and company car tax that favoured diesel power. And they concocted a flawed fuel efficiency test that has proven too easy for engineers to beat, even by legitimate means.

Indeed, if you wash away a bit of the bluster from yesterday’s front pages, I’m not exactly sure that Michael Gove’s ‘big news’ wasn’t just something we already knew anyway - namely, that cars powered solely by combustion engines are on borrowed time.

Almost all of the big manufacturers have pure-electric cars under development or already on sale, and many see mild and plug-in hybrids as an efficient stopgap. There was nothing in yesterday’s statement that would prevent these hybrid cars from being sold beyond 2040, regardless of whether they support their batteries with petrol or diesel power.

There are, as I see it, three key factors in whether this goal can be delivered. The first is whether there will be suitable cars. The second is whether the infrastructure can support it. And the third is whether the electricity supplies in the background will actually be green enough to make the whole process worthwhile.

I have considerable faith that car engineers and companies will produce viable plug-in hybrids and pure-electric cars by 2040. For some lifestyles - my own included - they’re already doing this now. And many brands are already suggesting that a quarter of their range will be electrified by 2025.

I’m far less confident on the other two issues. Companies like Chargemaster and PodPoint have the technical know-how to deliver charging points by the bucketload, I’m sure, but the sort of infrastructure to support a wholesale switch to at least part-electric cars will require more than just ambitious private firms.

It will, in fact, demand Government investment in not only physical charging stations, but the time and legislation required to allow them in hugely increasing numbers. And this was nowhere to be seen in Gove’s statement.

Then there’s the energy production itself. I’m sure the switch to electrification will solve a lot of the problems with poor air quality in heavy-traffic areas. And I know that lots more batteries in cars and smarter charging stations could help to move capacity around the National Grid, improving its efficiency

But as someone who uses an electric vehicle most days, I’m concerned at how the UK is going to get the sort of power production capacity that’s still going to be required to replace lots of combustion engines. And how much it will cost, in environmental, political and financial terms.

More detail is promised in what DEFRA calls ‘a further strategy on the pathway to zero-emission transport for all road vehicles’, due in March 2018. I look forward to seeing if those proposals deliver the clarification that is so badly need. Because as it is, I sense a danger that yesterday’s statement does little more than exposing other gaping holes in the Government’s understanding, knowledge base, policies and investment.

What do you think about the 2040 petrol and diesel car sales ban and the issues surrounding it? Let us know in the comments section below...