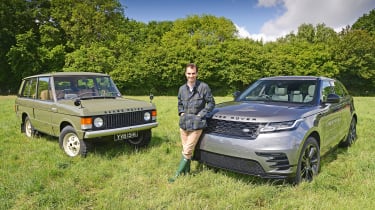 We’re causing quite a stir at the Land Rover Show at Dunsfold in Surrey. Standing in the middle of a lush field in Surrey, the sight of an original deep green 1969 Range Rover parked next to a sleek new Range Rover Velar is raising a few eyebrows among the 4x4 fraternity.

These two Range Rovers are a world away from the rows of enthusiasts’ workhorse ‘Landies’ in the next field, but the real reason for their interest is that these are no normal Range Rovers. For the first time ever, the original Range Rover Velar has squared up against the new model – and we joined them for the day to see how the Range Rover brand has developed over the past 47 years.

Although it’s been mentioned plenty of times in recent months, originally the name Velar was never supposed to be particularly well known, and until 2017 it was confined to the Land Rover history books. The idea of creating a more road-biased, lifestyle-orientated Land Rover was mooted in the early fifties with the ‘Road Rover’, but it wasn’t until the late sixties that the now iconic David Bache-styled ‘Range Rover’ project started to come to life.

In contrast to camouflaged prototypes of today, the Range Rover was never disguised when undergoing testing. What it did wear, however, was a curious word on the edge of the bonnet – where later the words ‘Range Rover’ would sit – and that was ‘Velar’ (pronounced ‘Vee-lar’). The story goes the letters were used from Alvis and Rover badges and the name also tied in with the Spanish word ‘Velar’ and the Italian ‘Velare’ that mean covered or disguised. 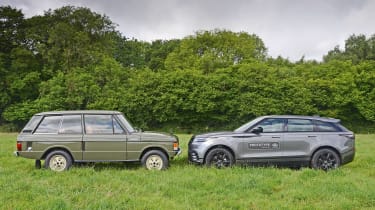 Seven engineering prototypes were built between 1967 and 1969 and registered as Velars on the V5 documents to confuse journalists. It worked, as the name ‘Range Rover’ was kept relatively quiet until the launch on 17 June 1970.

The deep green 1969 car you see here isn’t one of those prototypes but the very first of 27 pre-production Rangies. The wedgy, slightly blocky styling of the now classic three-door Range Rover is simple and in sharp relief to the later posh Vogues that paved the way for the new Velar. This original Range Rover was designed to offer a little more in the way of comfort than the standard Land Rover, so it looked more car-like, but was still eminently practical and functional.

You could say the 2017 Velar (confusingly, pronounced ‘Vell-ar’) almost fills the same remit – there’s the identical focus on unparalleled off-road ability, although it’s a more style-led proposition than the Range Rover. While the Bache-designed lines give off that very early seventies feel, the new Velar reflects current SUV styling trends with its swept stance and sloping roofline. 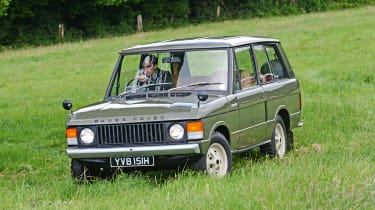 But it’s inside the where the car is most obviously different. The original’s dash is made of hard grey plastic, and the general fit and finish was designed to withstand being hosed down. The wheel is of a simple design, as are the switches and dials; the gearlever has an ungainly bend towards the driver. The radio looks strangely charming in a cabin that is so utilitarian nearly 50 years on.

While the old car was a no-frills affair in 1969, in 2017 it’s a glimpse of future Range Rovers. Expensive inlays and leather are what Range Rover is known for, but the Velar whisks drivers deep into the digital age. All but the entry-level ‘S’ get three screens as standard – there’s a 12.3-inch display ahead of the driver, and Land Rover’s new Touch Pro Duo System (a 10-inch touchscreen in the middle of the dash that tilts forwards as you enter the car and another 10-inch display where the buttons would normally be on the facia).

The new Velar is also as capable off road as the old Velar, too, because that’s the common thread between the two. Critics may say using the Velar name on a model that has little in common with the original is a cynical marketing ploy, but it’s been done because the new Velar is considered as groundbreaking as the original was for the brand nearly 50 years ago. It seems the Range Rover name is safe for another half-century.

The new Velar is offered with a selection of 2.0-litre four-cylinder and 3.0-litre six-cylinder petrol and diesel engines, but there was no such choice with the original. Under the bonnet lies Rover’s legendary Buick 3.5-litre V8, yet here it’s in later bored-out 3.9-litre form. 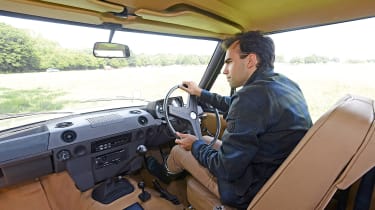 Twist the key and the engine just sparks into life without fuss; a prod of the throttle and the Velar rocks from side to side. The car feels old to drive, with its slow steering and mechanical gearchange; the brakes need a firm shove to bring the 4x4 to a stop, too.

But there’s a majesty to the way the old model wafts along that’s defined every Range Rover since, and it’s sure to be apparent in the new car. The original has a similar seating position, too, plus a sense you’re driving the best of the best.

Which Range Rover Velar do you prefer? Let us know in the comments section below…