We get behind the wheel of the sexy new Range Rover Velar, and it proves highly capable both on and off road

It’s no surprise that you’ll be waiting more than three months if you order a Velar now – this is one of the most desirable SUVs you can buy. It’s modern, super-stylish and will pamper you with impressive levels of comfort and refinement – as well as all the same off-road capability you’ll find on a Land Rover Discovery. It’s not cheap, though, and many rivals offer more advanced technology and greater space for passengers. Regardless, we’ve no doubt the Velar will be another massive hit for JLR.

Everything Jaguar Land Rover touches seems to turn to gold. But with such award-winning success, and the sales growth to match, the expectation from each new launch continues to grow. So can the all-new Range Rover Velar prove the company still has the Midas touch?

The Velar slots in between the Range Rover Evoque and Range Rover Sport models, and brings a fresh look to the family. Slim LED head and rear lights that wrap farther around the sides of the car, a more sloping grille and flush door handles update the Range Rover look.

It’s a clean and uncluttered style with subtle detailing, such as the crease line running from the front light to the back through the elongated side vents. And it’s proof that design director Gerry McGovern is to minimalist car design what Mies van der Rohe is to minimalist architecture.

Land Rover calls it ‘reductionism’ and that’s even clearer in what is one of the most stunning interiors we’ve ever seen. The traditional, clean horizontal dash is intersected by a central section running from the centre console, up to the all-new Touch Pro Duo infotainment system. 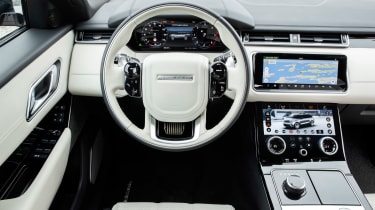 These twin 10-inch touchscreens are both a work of art and a touch of genius. When turned off, they’re flush black panels adding to the minimalist interior style. But when the car is switched on, the panels spring to life with crisp, high-definition displays, and the top unit swivels forward by 30 degrees to greet you.

Integrated into the bottom of the lower screen are two larger dials with their own LED displays, and a central volume knob. The bottom monitor controls the heating and ventilation as well as the advanced Terrain Response system, with the two dials working with either setting. The upper screen will take care of navigation, telephone and audio systems, while both screens are easy to use, swiping from one control to the next.

It’s all very well making beautiful-looking touchscreens, but Land Rover’s work in ensuring they’re usable has paid off, too. This is a really intuitive system and easy to connect to your smartphone. There’s an in-car WiFi hotspot should you want one, while the car will learn your routes and make suggestions to avoid traffic or help you find a parking space. There are three Meridian stereos to choose from, too.

It’s not all good news, though – Land Rover (and Jaguar) still can’t help if you want to use Apple CarPlay or Android Auto. The company is definitely lagging way behind its rivals in that respect. 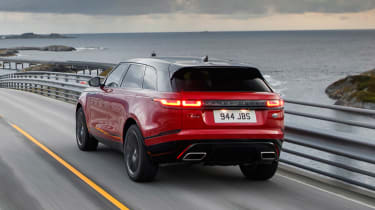 It’s also trailing on autonomous tech. Sure, it has Adaptive Cruise Control, Autonomous Emergency Braking, Lane-Keep Assist, self parking and Traffic-Sign Recognition. But there’s no sign of the self-driving kit offered on the Volvo XC60. That car also offers a beautifully built, stylish interior and an easy-to-use touchscreen – and all for less of an outlay.

On the subject of which, the range kicks off at £44,830 for the base-model Velar with a 178bhp four-cylinder diesel. It comes reasonably well kitted out, but if your dealer can’t persuade you to step up to the £50,420 S model with bigger wheels, leather seats, a Meridian sound system and navigation, they’re not doing their job.

SE costs another £3,940, while HSE adds a further £6,500 for range-topping luxury – unless you buy the First Edition model. If you want a sportier look, R-Dynamic will set you back a further £2,420.

We suspect the 234bhp diesel in SE trim may well be the sweet spot of the range, but for now we’re testing the 3.0-litre diesel in R-Dynamic HSE spec, costing £70,530. It’s beautiful and well equipped, but not cheap. It won’t cost pennies to run, either, with a claimed 44.1mpg and 167g/km of CO2.

Our test route in Norway was devoid of motorways so we’ll have to wait and see how the Velar fares on a cruise, but it seems to be a supremely refined car. While you’ll faintly recognise that it’s a V6 diesel under the bonnet if you accelerate hard, that’s about it. On the bigger wheels and tyres you’ll notice a bit of road noise, although that’s mainly down to the silence of the engine and the low level of wind noise. 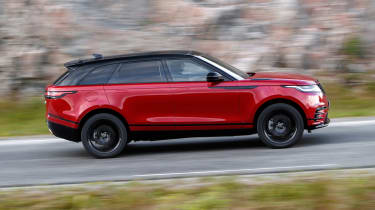 Performance is brisk for a car weighing two tonnes as well. It’s less about the 6.1-second 0-60mph time as the almighty shove from the 700Nm of torque that makes the diesel more fun than the supercharged petrol model. Throttle response is good, too.

The Velar sits on the same chassis as the Jaguar F-Pace, but our car came with added air suspension. The Velar still feels fairly firm, yet dismisses bumps and holes with disdain. The steering is meaty enough but with a slightly languid approach, while that firm-ish ride helps to limit body roll.

As you’d expect, this car will cope with far more off-roading than the vast majority of owners will tackle, with a host of advanced trickery in the Terrain Response settings.

At 4,803mm the Velar is a little longer than the F-Pace, while the 2,874mm wheelbase is identical. The Range Rover’s 632-litre boot is marginally down on the Jag’s 650 litres, but the newcomer’s interior quality is a big step up.

Given the steep prices, we were disappointed by the space in the back of the Velar. If the driver is tall enough to need the seat as far back as it will go – and you might need to if you’re six feet tall or more – knee room in the back is not luxurious. In fact, it’s not much better than in some new superminis. We expected more. 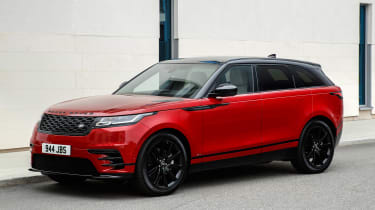 Click on the gallery above to see more of the new Range Rover Velar...