Are roads made of recycled plastics the key to eliminating the UK’s potholes? We find out… 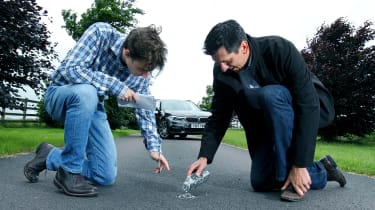 Is there a bigger bane on our roads than potholes? With our streets ageing, they now number in millions – and authorities are falling way behind when it comes to keeping up with repairs. The current backlog goes back 14 years, and will cost over £12billion to clear.

As a result, one in six roads may face closure if they’re not repaired in the next five years, and with diminishing council budgets, that’s easier said than done.

But what if, rather than working towards repairing our current roads, councils bring the network up to a modern standard and ensure it’s no longer susceptible to potholes in the first place? As it turns out, a British start-up is working on the solution, by mixing recycled plastics to create stronger, more environmentally-friendly roads that are cheaper to maintain and lay. To find out whether plastic is the answer to our roads crisis, Auto Express headed to Dumfriesshire, Scotland, to meet with MacRebur.

The company may have the answer to the UK’s road problems, but oddly it has its beginnings in India. MacRebur co-founder and technical director Gordon Reid tells us: “Two years ago, Toby McCartney, now CEO of MacRebur, was in India as part of his charity work, and found people would pick up litter and plastic from landfill sites and put it into potholes, light it, melt it and use it as a temporary repair.”

When McCartney returned to the UK, he got in touch with Reid – a civil engineer – and another friend, Nick Burnett, a trained chemist who at the time worked with Dumfries and Galloway Council’s waste department, to see if waste could be recycled to make better, stronger roads. 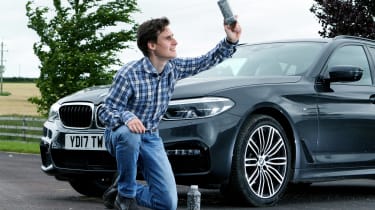 “We looked at the reasons for potholes emerging and saw that the problem is sometimes the asphalt itself,” says Reid. “So, we looked at how we could improve the top layer to last longer, to have more strength and to use up recycled products.” The search for pothole-proof roads led them to polymer-modified bitumen.

Adding polymer (the molecules that form plastic) to bitumen (the black oily residue used for road surfacing) makes the asphalt more elastomeric, giving it greater flexibility and strength, and ensures it’s least likely out of all road surfaces to develop potholes. This is nothing new, because some of the UK’s motorways are already covered in polymer-modified bitumen, but Reid tells us that so far the polymers have always come from oil companies which have a huge control on the market because they create the polymer-modified bitumen mix at their plants and sell it to highways agencies at very steep prices.

“Polymer-modified bitumen roads are some of the best roads in the world, but they cost a lot,” he explains. “And the trouble is that the oil companies only sell the bitumen mix in 20-tonne loads, meaning councils who only need two to three tonnes will be left with too much waste.”

This is when McCartney, Reid and Burnett developed the idea of using recycled plastics as the source of the polymer rather than oil. They worked on the idea for nearly a year, trialling different ways to produce the polymers from recycled plastic in the laboratory before coming up with the patented compound MR6 – tiny plastic-like polymer pellets that can be added directly to the asphalt mix. This means asphalt manufacturers can now add the polymer to the asphalt and bitumen mixture retrospectively in whatever quantity they want, rather than having to produce it in unnecessarily large 20-tonne quantities. 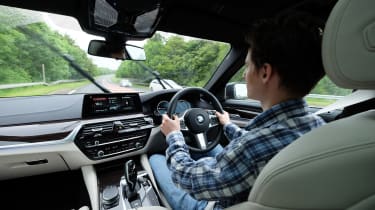 It’s better from an environmental view, too. The UK recycles about 30 per cent of its plastic, with contamination still an issue. “The problem many recycling plants face is contamination from other sources,” explains Reid. “A plastic toy with non-plastic wheels could not be recycled under conventional means.” MacRebur says it has a far higher tolerance for contamination than any other form of recycling, and can take in plastic waste that would have previously had to be sorted by hand to be recycled. “It’s about local waste for local roads,” Reid adds.

The recycled polymer-modified bitumen costs on average £10 less per tonne of asphalt than conventional modified bitumen. This may not sound like a lot, but considering that Cumbria Council alone uses 250,000 tonnes of asphalt per year to lay roads, it means there are £2.5million in savings for just one local authority.

MacRebur’s innovation isn’t only cheaper for councils; it’s also more durable. “We conducted a ‘rutting test’ to simulate a year’s wear on the road from traffic,” Reid says. “On standard asphalt, a good result would be a 3-5mm degradation per year; ours was coming out at just 1.6mm.”

Most roads come with a lifespan of around 40 years, during which they need roughly three separate top-ups of 40-50mm of road surface. Reid estimates that using MacRebur’s compound the roads would only ever need to be resurfaced every 20 years – saving councils even more cash in maintenance costs. 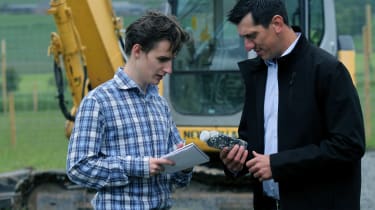 With lower costs and maintenance intervals, it didn’t take long before councils across the UK took interest. Cumbria was the first local authority to get involved.

It renovated part of the A6 near Calthwaithe back in December, after the standard asphalt didn’t prove resilient enough to cope with the high number of heavy goods vehicles using the road, and now says “it is looking forward to laying more of its roads” with asphalt made of recycled plastics. MacRebur has since been contacted by 20 more councils in the UK and has had interest from 33 different countries, from as far afield as Panama, Bahrain and India.

But the ultimate vision isn’t to just have better and stronger roads. MacRebur wants to “bring roads to the 21st century”, according to Reid. He explains: “We’ve done a lot of research into which polymers do different things, such as which give us optimal tensile strength, which will work for flexibility – so instead of just one product, we have multiple ones for different surface requirements.”

Certain roads will require flexibility from the surface to prevent potholes, while others, like those used by heavy goods vehicles and buses, will require high-tension surfaces capable of handling the extra weight and braking force generated by larger vehicles. 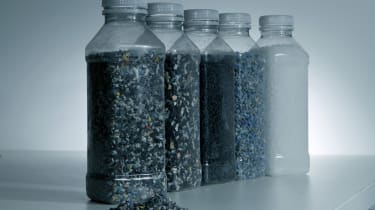 MacRebur has been able to produce various forms of polymers with different purposes. Reid says that cities like London could have flexible roads to reduce vulnerability to potholes from normal traffic, but bus stops along the road could be overlaid with high-tension mix to ensure they don’t wear out as buses pull in and out of traffic. Rather than having a single road layout, councils and highways agencies will be able to customise their roads to suit their traffic patterns. Cities could come with part-flexible and part high-tension roads, while pedestrian and cycle paths could be overlaid with a simpler form of polymer-modified bitumen because there’s no need for the added strength.

Old plastic bottles, disused bags and worn out toys are rarely the answer to a nation’s crisis – but they may just be when it comes to modernising our roads.

Other hi-tech fixes for broken roads

Researchers at Delft University in the Netherlands have come up with a self-healing asphalt that incorporates steel wool fibres. The fibres are conducive to electricity and, at the first sign of a crack, a magnetic induction machine is rolled over the surface to heat the mixture and close the cracks before they develop into potholes.

Researchers have conducted successful trials in the Netherlands on 12 different roads since 2010, with none needing repairs. Although the material will cost 25 per cent more than regular asphalt, like MacRebur’s MR6 compound, it could double road life, and save councils money long term.

Currently, some newly repaired potholes crack after as little as three months. But by heating the pothole so its temperature is aligned with that of the hot asphalt mix, the researchers believe road life could be doubled. Testing has also shown a 25 per cent reduction in repair costs, helping councils to meet their shrinking budgets.

What do you think is the best way to tackle the pothole crisis? Let us know below...