The Aspark Owl is a Japanese electric hypercar project, which boldly claims to be the world’s fastest accelerating EV 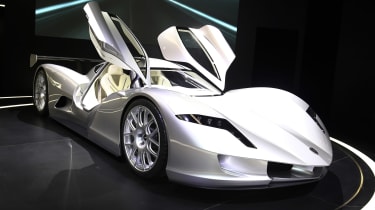 The Owl is a symbol of good fortune in Japan, and the 1,000bhp Aspark Owl electric supercar prototype revealed at the Frankfurt Motor Show will need plenty of luck if it’s to attain its goal of becoming the world’s fastest accelerating electric vehicle.

The Aspark Owl is the brainchild of Masamichi Yoshida, a Japanese technology entrepreneur working in partnership with long-established Japanese motorsport component manufacturer Ikeya Formula. Ikeya is little-known in the west, but already has the 500bhp turbocharged IF-02RDS track toy under its belt – a racing-inspired machine first shown at the Toyko Motor Show in 2013 and reportedly sold in limited numbers to a handful of super-wealthy owners and collectors.

With venture capital backing, the Owl’s makers hope to attract super-wealthy customers prepared to pay as much as a staggering £2m (3.3bn Yen) – according to earlier reports from Japan – for the privilege of owning the world’s fastest accelerating electric road car.

That title currently belongs to the incredible Rimac Concept One, which with 1,224hp and 1,600Nm developed by its battery pack knocks off the benchmark 0-62mph in a claimed 2.5 seconds.

It’s a record that’s going to take some beating, as the four-wheel-drive Rimac has extremely advanced electronics with a motor at each corner allowing four-wheel torque vectoring to maximise traction from its tyres.

An Aspark Owl chassis seen testing has twin electric motors mounted behind the driver, and a four-wheel drive system with a locked centre differential to equalise torque to each corner (see video below).

It’s also been tested with capacitors to deliver the required power density rather than batteries, so as yet we’ve no real insight into its real world driving potential as a road car.

Still, the Owl definitely looks the part, with its low and wide carbon fibre skin draped over a wide chassis of tubular construction with an aluminium floorpan.

How low? The Owl measures just 39 inches tall, which makes it an inch lower than the Ford GT40. The makers also say its 9cm ground clearance will make it road legal.

What do you think of the Aspark Owl? Let us know in the comments section below...