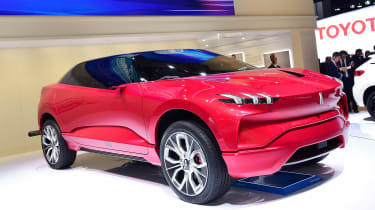 A new plug-in hybrid concept, called the XEV, has been revealed by Chinese manufacturer Wey in Frankfurt, reaffirming the company’s intention to break into the global mainstream.

Wey is the luxury division of Great Wall Motors, a major Chinese automotive sector player that already sells pick-up trucks here in the UK but also produces cars and SUVs for the domestic market. It has global expansion plans – there’s been talk of a factory in Mexico or the US – and its Wey brand launched last year with its sights set on the premium sector inhabited by the likes of Audi, Infiniti and Volvo.

• All the latest news from the 2017 Frankfurt Motor Show

The Wey XEV is not all-electric like the Tesla Model X which it vaguely resembles, but it shares the Tesla’s sporty crossover/SUV philosophy, and has a similar profile with eye-catching gullwing doors. It has a petrol engine driving the front wheels only, while the plug-in battery provides power to the rears. 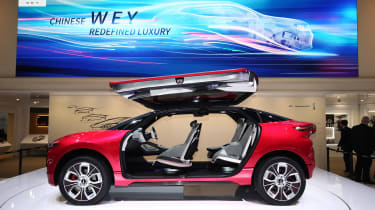 The Chinese automotive sector is often criticised for none-too-subtle copies of European products, but the boldly-styled Wey XEV deserves credit for its unique looks. It’s an eye-catching concept with a coupe-like side profile, a swoopy notched beltline and unusually contoured front and rear ends. Inside are four individual seats, and Wey says the concept is equipped with a raft of advanced technology including autonomous driving features.

There’s no official confirmation that the XEV is destined for sale, but the basic concept design doesn’t look too far away from production-ready, and it fits the global trend for increasingly funky crossovers with an eco-friendly powertrain.

Would you like to see the Wey XEV on sale in the UK? Let us know in the comments section below...