Can you build a car from plants?

We meet the team behind the first car ever to be made from plant fibre, and take a ride in the green machine 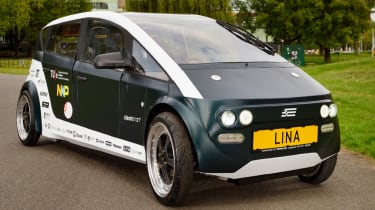 Manufacturers are constantly searching for lighter, cheaper and more durable materials. The past 20 years have seen steel slowly replaced by aluminium in vehicle chassis, while carbon fibre has also started to trickle down from race cars to mainstream production lines.

Now a team of students from the Netherlands is saying car makers should start using more sustainable materials, such as plant fibres, to cut down on waste and pollution. And to show exactly how it can be done, the group of Dutch academics from Eindhoven University of Technology has built the world’s first plant-based vehicle.

Auto Express visited the TU/ecomotive team at the Dutch embassy in London to find out how the planet’s first car with a chassis that is made of plant fibre came to be and what the unique model aims to achieve. 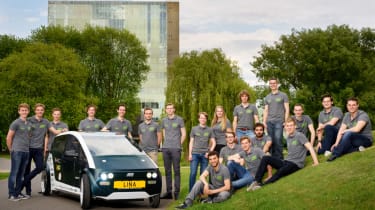 The idea for a plant-based vehicle started two years ago. Each year, the TU/ecomotive team builds an electric car to test new technologies and its own engineering wits, but this year it wanted to do something different.

Quinten Oostvogel, an automotive engineering student and team manager of the TU/ecomotive group, told us: “We wanted to look at bio-based options to build a chassis and considered the plant flax. Flax fibres are very tough, and the flower is very popular in regions like Canada and Russia. This makes it ideal for making strong composites.”

The 22 students then began designing, engineering and building the car. The aim was to take part in the 2017 Shell Eco-marathon, which was held in London in May. Mechanical engineering student and chief mechanical systems and chassis engineer Bas Huisman explained the process: “We built the flax fibres ourselves,” he said. “We first dried thousands of plants in a field in the summer.”

The plants were then placed in an oven to help separate the fibres, which were woven into 100-metre rolls that were dried once more. “We then laid the fibre rolls on top of one another and put them into an oven and pressed them hard to create strong sheets of flax fibre,” Huisman added. 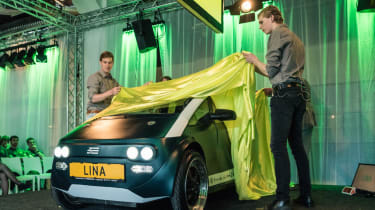 Sheets of flax fibre on their own aren’t strong enough to endure the stress a vehicle chassis goes through when on the road. To add some extra strength, the TU/ecomotive team placed a honeycomb PLA (polylactic acid) structure between two sets of compressed sheets.

The end result is several big plates of flax-fibre ‘blocks’ that can be cut to fit. According to Huisman, 80 per cent of the chassis is made of flax fibre; the rest, such as the suspension, is bolted on. The structure only tips the scales at 70kg, although Huisman claims it could weigh as little as 40kg – a lot lighter than an aluminium chassis.

The rest of the car – an electric drivetrain featuring two motors and a modular lithium-ion battery system – was finished in seven weeks. The vehicle was aptly named Lina by the students, after the Greek goddess of weaving.

Although the 310kg gross vehicle weight was above the maximum 225kg allowance set by Shell to race in the Eco-marathon in London this year, the purpose was never to compete. Rather, it was to make a point. “The reason we created this car was to show manufacturers that they should be looking at different materials,” Oostvogel said.

He explained: “Car makers opt for lightweight materials such as aluminium and carbon fibre to create lighter, more efficient cars. The processing of these materials, however, requires five to six times more energy than steel.

“Consequently, energy that is saved is now spent during the production phase. In addition, recyclability of these lightweight materials is lacking. These are not sustainable materials,” the engineering student added. 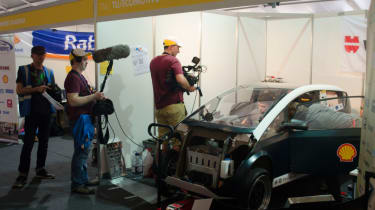 Flax fibre is not only more environmentally friendly, it’s also far lighter than any of the materials and can easily be recycled. But what about safety? Oostvogel admitted the team hadn’t crash-tested the car, but said that the honeycomb structure means the flax-fibre chassis has the same structural strength as a fibreglass chassis, which isn’t too far off the strength of an aluminium unit.

“We’ve done some simulation crashes and the results are encouraging. Definitely you could see flax fibres in future chassis of production cars,” Oostvogel told us.

The TU/ecomotive team isn’t alone in encouraging research and investment into bio-based chassis. Japanese researchers at Kyoto University – working with the Denso Corporation, Toyota’s biggest supplier – are currently studying how wood particles could be incorporated into chassis manufacturing for future vehicles. 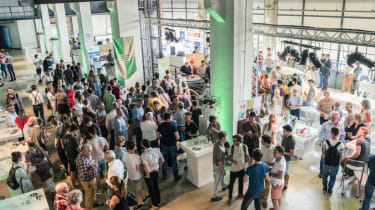 Wood particles weigh five times less than steel, but with the correct engineering can be up to five times stronger than the metal, potentially offering huge benefits for car makers. Oostvogel said: “People need to start seeing bio-based materials as more than paper cups. They offer huge amounts of potential utility.”

Auto Express was given a brief spin around a closed London street to get a feel for the Lina. The moment you climb aboard, there’s a distinct but pleasant smell of burnt wood.  “This is the flax. Because we’ve heated it in the oven there’s a smell to it,” explained team manager Quinten Oostvogel. 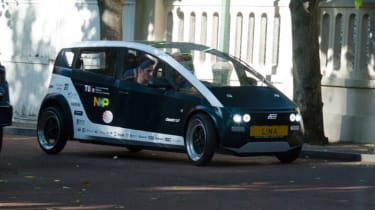 Inside, the group has fitted mood lighting and music-streaming ability; this is, after all, a car designed and built by students. With no noise insulation, the electric drivetrain and road noise make themselves heard, and the suspension is rigid, but all these are minor points to note and nothing you wouldn’t find in any other prototype.

Whether this is the future of cars is hard to tell at this stage, but as an engineering feat the flax-fibre car has to be marvelled at.

Is a car made from plant fibre a good idea? Let us know your thoughts below...