The Chinese-backed Italian firm has unveiled the limited-run hypercar with a naturally aspirated 9,000rpm V12 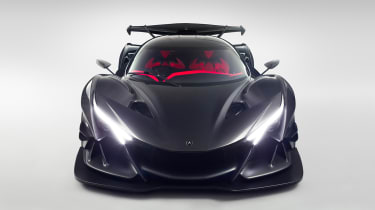 Apollo Automobil has unveiled its new IE (Intensa Emozione) hypercar, limited to an ultra-exclusive run of 10 units. The car is an attempt to rival exclusive exotica such as the Ferrari LaFerrari and Aston Martin Valkyrie.

Literally translated to English as 'Intense Emotion', it has been developed by Apollo in Italy with the aim of bringing back the connection between driver and car that it claims has been lost due to the increasing presence of autonomous technology.

Apollo's ethos is proven under the bonnet. Instead of a clever turbo-hybrid powertrain, the IE is powered by a naturally aspirated a 6.3-litre V12 engine developed in partnership between Apollo and fellow Italian firm Autotecnica Motori. The V12 produces 780bhp and 760Nm of torque and has a redline of 9,000rpm. Three engine modes are available on the IE for road use, wet weather driving and full-on track mode to dial in all 780bhp. 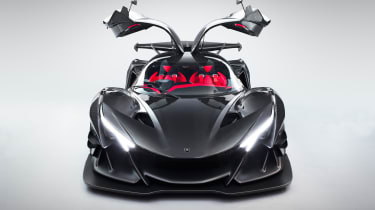 The chassis is made entirely out of carbon fibre, with the monocoque and subframes weighing just 105kg. The whole car has a kerb weight of 1250kg and is run on Michelin Sport Cup 2 tyres.

As a result of the lightweight body and engine performance, 0-62mph takes just 2.7 seconds and top speed is 208mph. Compared with its hypercar rivals, it seems a little slow but the IE is fitted with sophisticated aerodynamics that reduces top speed but increases performance on race tracks.

The aerodynamic body generates 1350kg of downforce over 186mph with an aerodynamic efficiency which Apollo claims to be closer to an LMP2 racing car than that of a roadworthy supercar. 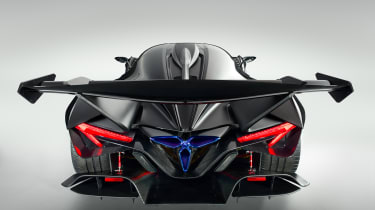 The IE follows the Arrow concept, which is set to enter production in 2019. The IE is Apollo’s second entry into the hypercar world since it was rebranded from Gumpert. Under the Gumpert guise, it produced the Apollo supercar that set the then-production car lap record at the Nurburgring in 2009 with a time of 7:11.57.

Now with Chinese backing it has shifted resources from Germany to Italy in order to develop the IE hypercar. It will have a price tag upwards of £2 million.

What do you make of the Apollo Automobil IE? Let us know below...