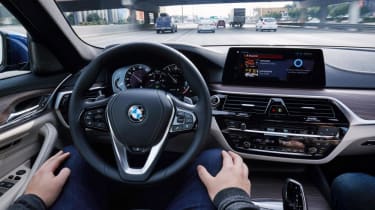 The insurance industry has laid out a set of criteria for the Government to follow when defining autonomous cars.

Worried about drivers potentially misunderstanding different levels of autonomy on board new cars, the Association of British Insurers (ABI) together with Thatcham Research, have listed 10 requirements for self-driving cars, and are urging Government and automotive chiefs to ensure any car referred to as autonomous meets these criteria.

The ABI and Thatcham recommend an autonomous car should comply with all UK traffic laws, should safely “manage all reasonably expected situations by itself”, that it should offer a clear handover to the driver if human input is required, and that it should “record and report what systems were in place at the time of an accident.”

These industry recommendations come hot on the heels of the Government’s Automated and Electric Vehicles Bill, which had its first parliamentary reading in October. The Bill sets out a number of suggested laws for autonomous vehicles - including one that requires insurers to accept liability where automated systems have caused an accident – but it falls short of clearly defining what an autonomous car actually is.

Instead, the Bill simply refers to autonomous cars as vehicles that are capable “in at least some circumstances or situations, of safely driving themselves.”

The ABI and Thatcham’s recommendations go further than that broad definition, expressing that “insurers want to see manufacturers being absolutely clear about how they describe what their vehicles can do.”

The group recommends autonomous vehicles should have back-up systems in case primary self-driving systems fail, and says “adequate and appropriate notice must be given if the vehicle needs to unexpectedly hand back driving control” - giving provision for autonomous cars to require some driver interaction as the emerging technology surrounding self-driving cars matures.

Another proposed requirement is that autonomous vehicles should clearly describe their self-driving capabilities, and that these descriptions should linked to Vehicle Identification Numbers, or VINs. This last aspect would make the Secretary of State for Transport’s job significantly easier as, under the proposed one Automated and Electric Vehicles Bill, the Department for Transport must maintain a list of all autonomous vehicles on the UK’s roads.

Launching these recommendations, Ben Howarth of the ABI, said: “Truly automated vehicles have the potential to drastically reduce road accidents, cut delays and make it easier for people who cannot drive to get around. However, there will inevitably be a transition period from today’s cars to the vehicles of the future, via vehicles which offer gradually increasing levels of autonomy. There is the potential for confusion during this interim stage when people could wrongly think their vehicles can be left alone to manage a journey independently.

Howarth said the ABI and Thatcham’s recommendations should be “adopted across the industry to help give clarity to consumers.”

Do you think these points go far enough? Let us know if you think any ideas have been missed in the comments section below…