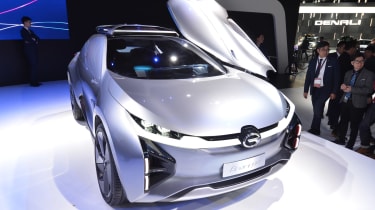 Chinese manufacturer Guangzhou Automobile Group (GAC) has unveiled the Enverge, an electric concept crossover SUV, at this year’s Detroit Motor Show. The Enverge is said to preview a future production model for the North American market.

The GAC Enverge is aimed at ‘young consumers’ and caters for its target market with bold styling and features such as scissor doors and a complete lack of side windows, though how much of the design makes it to any production version remains to be seen.

The svelte coupe-like design is loaded with angular shapes and creases, and elements of it look uncannily similar to the Lexus LF-1 Limitless concept car also revealed in Detroit. 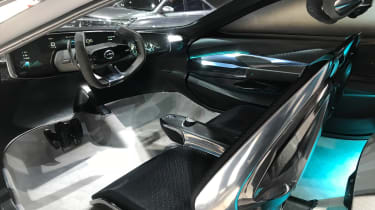 The GAC Enverge’s bodywork encases a 2+2 layout. Two doors give access to the four seats inside what the brand terms a ‘floating space capsule’ inspired interior. The cabin design features a horizontal display screen and VR technology but the most unusual feature is the glazing, or lack of it.

Silver paintwork appears where the side windows would traditionally be, giving the concept a highly unorthodox appearance. To get around the lack of side glass, and help with visibility, rear-facing cameras have been installed in place of wing mirrors.

The Enverge is built on GAC’s all-new EV platform and is powered by a 71kWh battery that gives the small crossover a range of over 370 miles. Fast charging is available with the Enverge taking just 10 minutes to charge up 240 miles of range.

Would you like to see a production version of the GAC Enverge come to the UK? Let us know below...